A wonderfully gripping spy thriller which explores the themes of love, loyalty, class and politics.

In the wonderfully atmospheric Rialto Theatre, the audience took their seats as one lone and brooding Mr Nightingale sat upon the stage, gun in hand. The tense tone was immediately set and remained for the duration.

The Communist Threat is set in the squalid basement of a luxury hotel in 1950s Vienna, where two British spies have been sent to kill a traitor.

The play begins as working class Nightingale, the proud owner of three suits and a devout football fan, awaits the arrival of his accomplice, Mr Kingfisher, an esteemed war hero and Cambridge graduate. As the pair anticipate the arrival of their presumed target over whisky and a cold dinner, what unravels is a multi-layered drama of class, politics, patriotism and loyalty.

The single-room set design and minimal props complimented the intensity of the play beautifully, allowing the charged energy between the two characters to take centre stage. Jesse Briton's directing is brilliant, and through simple stage acts and settings the continually shifting power struggle is portrayed.

In an overwrought hour of continual twists and turns the audience were visibly gripped. The dialogue is sharp and witty throughout, with moments of well-timed comedy interjecting the charged atmosphere. As Nightingale laments the futility of cricket, there was raucous laughter from the audience.

The acting, from David Holmes as Kingfisher, and Kieran O'Rourke as Nightingale (who are also the script writers) is superb. Both characters are utterly believable, compelling and likable.

The only nagging criticism is how void of satisfaction knowing how it all ends is. In a play so heavily reliant on the unknown and the implied such a conclusive ending felt at odds. Nevertheless, I was reluctant to leave the theatre, Rusted Dust have excelled in a creating a gripping and entertaining spy thriller. 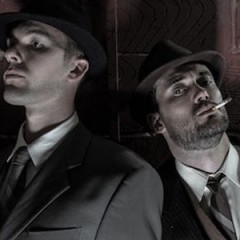 A wonderfully gripping spy thriller which explores the themes of love, loyalty, class and politics.

Revenge of the Sith review.