Voice MagReviewsAlice Through The Lo…

My review on the new Alice in Wonderland film. This review contains spoilers!

On the 26th of May I was invited along to a private screening of Alice Through The Looking Glass in Manchester. Since Alice In Wonderland is one of my favourite things ever, I was delighted to be given the opportunity to see the new film, not only before anyone else but also for free! When I entered the room you could instantly feel the buzz in the air as everyone anxiously waited for the film to start. As I sat there and a picture appeared on the screening welcoming us to our own private screening I couldn't help but wonder whether this is what celebrities feel like when they get invited to special events! If you haven't seen the film yet or haven't read what it's about then I would suggest you stop reading now and come back once you've seen it. This may contain some spoilers.

The film takes place 3 years after the first one, and Alice has returned from China to the news that the man who once wanted to marry her, has marries someone else and took over his fathers company. Since the company is no longer run by his father, Hamish decides that there's no place for Alice in the business and gives her the opportunity to work as a secretary instead since she's a women. After fighting with her mother and storming off she finds Absolem, now a butterfly an follows him into one of the rooms in Hamish's house and watches him fly through the mirror. She then follows him and finds herself back in wonderland.

Once the excitement of Alice being back has died down, her friends inform Alice that the Mad Hatter has become ill and is dying. Alice goes to visit the Mad Hatter in attempt to find out whats causing the Mad Hatter to be so ill and finds out that he's missing his family and he believes that they're still alive. Alice then goes on an adventure to try and solve the Hightopp family mystery and see whether the Mad Hatter was right or in fact just madder than ever.

Along the way she meets time, who is actually a person and gets into a bit of trouble with him. Time has something she needs to help her on her adventure, but he's not willing to give it to her so she has to find a way to get this to help her friend. As she tries to change the past she realises she can't change the past only learn from it.

I enjoyed this film a lot more than the first one, and I liked the first one a lot. The new film is now directed by James Bobin who is responsible for films such as The Muppets and Tv shows such as Flight of the Conchords. He took on this film with a more comedic approach and made the film a lot lighter than the first. Although Tim Burton was still a producer and played a part in how the film was made, he didn't have full control of it so it wasn't as weird and wacky as the first. I understand Alice in Wonderland is not the most sane story, but in the first film it seemed like Tim Burton wanted to make it as weird as he could which then lead it down a darker routine where as this one is more family friendly.

The film explores the characters a lot more, the first film introduces the characters that we all love but this film looks at them in more detail and Individually. We find out in this film why the queens don't get along and what happened in their past to make them hate each other. You also look in to the Mad Hatter's past, how his family died and you even get to see a young Mad Hatter, which I might add is very cute!

The one thing I would say I would improve about the film is that it was a bit too short. It was one of them films that you sit through and time just flies because you're really enjoying it. I know its Disney and they make the films shorter to hold the attention of the children but the story was just so good I wanted more! I will say though, don't go into the film expecting it to be the same as the book. A lot of the book was used in the first film, almost like they didn't expect to make a second film and they wanted to use all of the characters but it was nice to see another story, a completely new one.

I would recommend this film to any Disney fan out there. Because the film is lighter, the storyline is easier to follow than the first one and it's not as weird. The whole family can go and enjoy it and fall in love with the story of Alice and the characters all over again and it doesn't require you to watch the first one to be able to understand what is happening in the story. 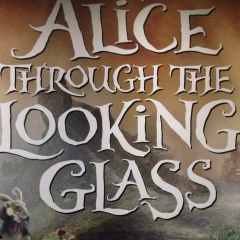 Alice Through The Looking Glass

My review on the new Alice in Wonderland film. This review contains spoilers!