Daniel Bye goes through the trials and tribulations of hypochondria, disease and epidemic; leaving the audience suddenly very aware of their own coughs and splutters.

It was not until our leading man, Daniel Bye, started explaining to us how a disease spreads and becomes an epidemic, that we collectively realised that we were a cell. The audience is sat in a circle for this show, around a smaller black circle that lay on the floor, something which I assumed initially was simply supposed to be the stage. As Daniel began flinging more and more Liquorish Allsorts into the 'nucleus' we began squirming in our seats, realising our proximity to one another and wondering what kind of infections and diseases were hiding in our neighbours bodies.

Which I suppose was the point; Daniel told us the story of a virus that's quickly sweeping the nation, where people cannot stop sobbing. It seems to be affecting everyone, except for him, so while the main narrative was an exploration of why he is unchanged, he also went about explaining to us how these things happen, telling us it is simply a miracle that we have not been ravaged by epidemic. It was a brilliantly staged journey, Daniel really utilising every part of the cyclical space, while four harsh white lights on each side of the seating was reminiscent of the light shone into the face when at the doctors, or a hospital, really exposing, trying to work its captive out.

We also learnt of the R Nought ratios of viruses, the biological processes needed for diseases to spread, and finally Daniel told us how the chemical balance of tears of pain and tears of emotion are nearly indistinguishable. This seems to be a consistent motif throughout the play; the disease is one of emotion coupled with pain, a journey it seems our protagonist is going through as he mentioned his late friend's sudden death and the guilt he feels surrounding that. The narrative felt very well thought through and that it was about to reach its conclusion that would make us really all think and come to some sort of realisation, but it just kind of…didn't. Instead, we were left with a very British 'Keep Calm and Carry On' message that seemed to undermine the ride.

It was an intelligent piece, which explored the extent to which life is teetering on a very delicate balance at all times. Daniel interacted very nicely with the audience, creating a warm environment, although perhaps feeling a little contrived at times. Yet, I realised at one point, when Daniel had tried to make himself cry by cutting up onions and inhaling them desperately up his nose to no avail, that I spent a good 5 minutes after, terrified that the smell of those onions would finally hit my nose and I would not be able to control my tears. But it never happened, which seemed poignant. All in all, the play would have had more of a profound impact if Daniel had given us either a resolution, or space to think for ourselves what he meant. His ending hung somewhere in the middle, leaving me feeling a little underwhelmed.

This show has now finished at Brighton Fringe. For more information, head here. 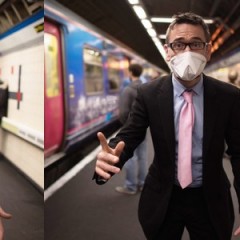 Daniel Bye goes through the trials and tribulations of hypochondria, disease and epidemic; leaving the audience suddenly very aware of their own coughs and splutters.