An extremely powerful performance, which expertly handles the subject of death and dying.

When going to see a show based entirely around the theme of death, one might expect to leave feeling positively morbid and existential. However, much to my surprise, that was not my experience when going to see A Graceful Dying by Antonia Rolls at Brighton Fringe's Sweet Dukebox. Don't get me wrong it was still a fairly difficult thing to go and see, there wasn't a dry eye in the house by the end, but the way the subject of death was so expertly blended together with ideas of hope, love and appreciation made the event a very enjoyable experience.

Right from the beginning, this one woman show demonstrated an interesting blend of art, music, imagery and personal stories which continually kept my interest and allowed for the concepts surrounding death and dying to be approached via several different art forms. The main story arch of the show was built on personal experiences, which immediately made the performance all the more emotional. I was taken aback by a particular home video, played in memory of a deeply loved relative, which sensitively showed what it's like for someone at the end of life. One of the best compliments I believe I can give to this show is that I felt educated by it. I didn't feel preached to, I simply felt after experiencing it that I was more aware of how death can come so suddenly and therefore it helped me to appreciate my own life.

At the beginning of the performance Antonia spoke about how as a teenager 'dying was something other people did', a sentiment I very much connected with given that I am a teenager who is fortune enough to have not seen death up close. After the performance I still felt myself echoing that idea, death stills seems a strange and distant thing to me, but I can say that A Graceful Dying helped me to see it from a closer perspective. I left with tears in my eyes but also a smile on my face, as this brilliant show had both saddened and uplifted me with its expert writing and direction. 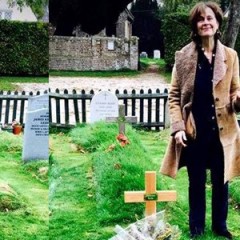 An extremely powerful performance, which expertly handles the subject of death and dying.