An absorbing narrative which takes the audience on a sometimes unnervingly vivid journey of tragedy and comedy.

Sarah Kendall delivered a captivating performance at Brighton's Komedia last night, which defied the conventional confines of stand-up in an hour of poignant storytelling.

A Day in October is set in Newcastle, New South Wales in the early 90s and tells the story of Kendall's surreptitious friendship with school victim, George Peach; 'a seal with a period' in the shark-infested waters of her shoddy high school, in a town which was once the young offender capital of Australia.

A knack for relatable self-depreciation and an uncanny perceptiveness on the workings of adolescent pack mentality makes for immediately good gag material. Kendall won the audience over, recounting the perils of being a fair-skinned, acne-prone teenager forced to collect discarded gherkins in McDonald's for three shifts a week. Her warmth and likeability made even the most excruciating anecdotes hilariously funny.

Somewhere in the middle the tale took a dark turn. As the mood became more sombre, the punctuated bursts of light-hearted sketches seemed at odds with the serious subject matter. At times it was almost uncomfortable lurching between an ill-fated adolescent tale and eccentric aquatic sex dreams. Perhaps there was something to be said in this juxtaposition, which was a little lost on me.

However, as the story and performance drew to a close the entire room was captivated, Kendall had built the tension so dramatically the whole room seemed to audibly exhale at once. It was a tenderly funny and highly original work which works well so long as you're prepared for something beyond the familiar stand up routine.

This was a one-off performance at Brighton Fringe. For more information, head here. 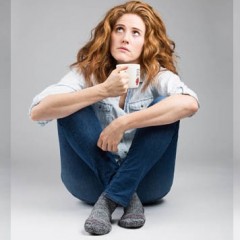 Sarah Kendall: A Day in October - with support from Stephen Bailey

An absorbing narrative which takes the audience on a sometimes unnervingly vivid journey of tragedy and comedy.