Perhaps not a true collision of magic and food, but entertaining and full of surprises nonetheless.

As a mixed bunch of punters filed into the upstairs room of The Hobgoblin there was a certain amount of anticipation in the air. Greeted with a man in a lab coat who promised to reveal what happens 'When Magic & Food Collide,' expectations were high, and judging from the endless hum of laughter the results did not disappoint.

From mysteriously making Brighton's favourite snack foods appear, to performing gingerbread-man voodoo, the audience were amused and intrigued throughout the hour-long set. Which after a day of beers and fringe shows is quite the feat. As with most magic shows, audience participation was key and the continuous roll of eager volunteers venturing onto stage to assist in various trickery kept the pace, as well as the jokes, moving.

Whilst at times the magical element and Meech's connection to his theme of choice were tenuous, the show is delivered with enough charisma and panache to carry it through. Meech's strength undoubtedly lies in his ability to laugh at himself, perhaps best summed up in his own words: 'Not all of it's amazing; some of it is just amazingly silly.'

All in all, the performance was an hour of back-to-back, well-executed gimmicks and gags which anyone with a taste for food and an inclination towards the bizarre would enjoy. 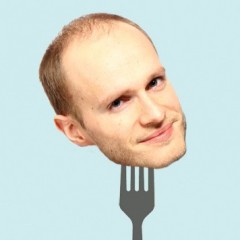 Perhaps not a true collision of magic and food, but entertaining and full of surprises nonetheless.