It was hot, painfully hot in the Main House at The Warren. But, stunning production value prevailed.

Although the heat made it difficult to stay on track with the story, which left a lot to interpretation, the richness of how the narrative was told made up for any shortcomings. The production value was incredibly high – the little set pieces they had were beautifully put together.

They used lighting and smoke to great effect in differentiating the dreaminess and flashbacks and what was really happening. The costumes, though made from rudimentary materials were also striking and said more about the character than met the eye.

The puppets and masks were small, sculpted pieces of art and tiny characters all of their own. The actors bought these models to life, with expertly directed physicality that played with mood and motivation.

The music and acoustics were excellent; ethereal and dramatic tones suited perfectly to their situation.

The performances were generally commendable. Some slippery Cockney accents and underplayed reactions – the last thing you expect from theatre – gave the niggling feeling of wishing they'd be more angry or more upset.

Overall, a riveting and innovative visualisation of the road to homelessness, which makes for an enjoyable show for all audiences.

The Marked by Témoin Theatre's run at the Brighton Fringe Festival has ended. They do shows at conventional performances spaces as well as hostels and homeless shelters. For more information, visit the Témoin website. 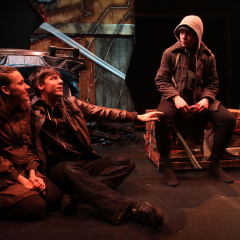 It was hot, painfully hot in the Main House at The Warren. But, stunning production value prevailed.