A pair of painfully hungover comedians who tickled more ribs than the majority of (apparently) sober performers at the fringe. Perhaps they're onto something…

Jacob Hawley and Jake Farrell are funny people. And that's kind of what you want in your comedians isn't it. The sweaty upstairs room at Brighton's Hobgoblin throws up a mixed bag; the shows are free, sometimes embarrassingly empty, hell, one performer (we're looking at you Heather Jordan) didn't even turn up. In short, no performance here is a done deal, and in the first moments of each show in this tiny room, you're just desperately hoping for a genuine laugh. Albeit, probably not quite as dearly as the comedians are.

Jake Farrell, introducing the show, is a natural. Obligatory conversations with the front row felt easy and quick-thinking, and the laddish expectations of the show - as hinted by the pair's poster - quickly gave way to the realisation that this is a more nuanced exploration of youth, half-hearted liberalism, family ties and artistic expression.

Jacob Hawley was first to deliver his full routine. Introduced with a warning of his severe hangover, he nonetheless drew immediate and repeated laughs from the crowd. The 'stretched child' took a stab at proud Great Britain, St George (and his lizard) and weak activism. He was dry, perceptive and unexpected. Well-planned skits were punctured with straight-faced asides, such as: 'My dad doesn't know I do this', in the middle of one particularly silly joke. Towards the end of his session he asked if there were any reviewers in the crowds, to which myself and the man scribbling notes beside me obviously kept schtum. Greeted with silence, he sighed, 'Ah, thank f*** for that'. If this was Hawley off-form, he must be a treat on.

Next up Farrell returned, intro'd with a cheesy video for the retrospective we were about to witness, of the multi-talented blogger, social activist and general creative with a capital C. Mocking the throwaway nature of 'content creation' (I promise I've never used that term…) while also addressing the childhood and early-twenty-something floundering around for a worthwhile artistic voice, Farrell's Generation WHYY???-aimed performance was endearing, self-deprecating, and at times very astute.

The energy lulled slightly towards the end, as Hawley lolled on a table at the back of the room and Farrell looked rather pleased to wrap up. Still, they were a darn sight more entertaining than the majority of fringe comedians we've caught so far. 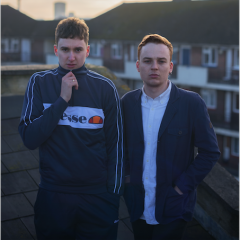 A pair of painfully hungover comedians who tickled more ribs than the majority of (apparently) sober performers at the fringe. Perhaps they're onto something…