An absurd music performance that just didn't hit the spot.

Everything was absurd and made absolutely no sense in this kaleidoscopic performance at Brighton Fringe's Spiegeltent. The stage was filled out with completely random things; from ping pong balls to a sink, from a hula-hoop to metallic scaffolding. Three performers in colorful onesies acted in completely different ways and made different sounds. Family pictures were projected while songs - with the occasional electro tune - blared out.

One character wore a horse mask and lay down in a container, filled up with small balls by another performer. They sat down and ate food with extreme sadness, crying while partially regurgitating what they had previously eaten.

Of course, absurdity, when done right, is a thing. But this doesn't mean that every absurdist act or performance is successful simply because of its absurdity. Often, it's just annoying. Sometimes the show was mildly funny, but it wasn't nearly engaging enough to make these moments worth it.

Even if we consider that there shouldn't always be the necessity of a tangible message or meaning in a fringe show (it can be pretty bonkers), entertainment should be provided in one form or another. This experimental piece, which could have been promising, went waaaay too far. 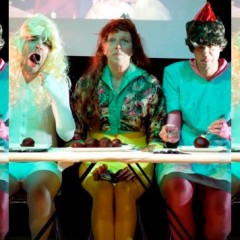 An absurd music performance that just didn't hit the spot.