Breakfast at Tiffany's has amazing production value, but the actors have much to learn from this show. It is a play I don't recommend to see unless you are looking to work backstage and wish to learn what good .

Breakfast at Tiffany's, wow. Not quite what I expected. I didn't know much about this story. The only thing I knew was that the book and film adaptations were highly successful. When I first saw the poster of Breakfast at Tiffany's with Pixie Lott, I was very excited to see an amazing singer performing as an actor. As I traveled to the Alexander theatre, I felt I would enjoy this romantic comedy, but honestly; I was left disappointment and very confused as I left the theatre.

First I want to talk about the characters and actors and the people who portrayed them. The actors performance in this production should be applauded, physicality wise, not verbally (I'll get to that in a second). The actors put a lot of work into developing the characters voice, behaviour and personality, but unfortunately, the dialogue is where the performance fell short. I felt the dialogue was dragged out, my attention was drawn to the walls and my drink of Pepsi. Because of this, I missed out on important information about the story, so I found myself looking around thinking 'what did I just miss?' The characters were not very memorable as it often felt like they were there for the sake of being there. For example, the landlady who wore roller skates was often seen from time to time, either to say something funny or some additional dialogue. I often felt she could have been so much more of an interesting character. Another character was... well... I actually don't remember any of their names, which is the next problem; because there were some characters who were on stage that I didn't feel interested in. They weren't exactly cardboard cut-outs, but like I said earlier, they seemed to be there for the sake of being there to add to the performance. At times I didn't know when a character was actually stating something serious and especially saying something funny. In fact some people in the audience where confused whether to laugh or not, (I was one of them). I felt that the characters didn't seem like they were developing as the play evolved. I'd describe it like a book that has pages and different numbers but similar paragraphs leaving you to think 'is this moving forward or is this all I'm getting out of it?' I appreciate the effort the actors actually put into the characters, but what failed them in my opinion was their long dialogue which was making it painful to hear.

Pixie Lott's performance doesn't save the day either. Her character portrayal was actually good; she didn't seem like Pixie Lott, she was very much the character in this story. There was however so many things I wished they explored on this character. At times, Lott's character 'Holly' was very bubbly and energetic, but she also had a heartless and selfish side to her too, with no explanation ever given making it difficult to connect with the character. She had many partners only for their wealth, but why? She is often bubbly and is called a phony, but why? She had so much to say in this play, but most of it felt unimportant. Remember how I said the dialogue felt dragged out? Well if you mix that with Lott's husky voice, it becomes a burden to listen to. The diction in her words were very unclear, which left me confused to understand what she was saying. Her jokes where hard to laugh at as I couldn't understand them, I only knew they were jokes because there were people in the audience who were nervously laughing. This lead to even bigger issues where she went from one extreme emotion to the other, from happy to upset. This left me wondering what was going on and I didn't feel the need to connect with her. At times I felt her character often contradicted herself a lot, for example one of the main characters named Paul, he was a writer and began to fall for Holly. She said that he reminded her of her brother who was out at war. If that was so, then why did she feel the need to be a little manipulative and toy with his heart? Why would she go so far to strangle him? When Holly introduces herself to Paul, she does so by entering his house through his window, telling him that he looks like her brother, and sleeps in his bed. This created a character that was very hard to relate to. With the long dialogue and unclear diction I tried to find reasons to understand her motives, unfortunately... I just couldn't do it and gave up; I just didn't want to watch a play that I couldn't connect to and even some audience members were leaving in frustration.

Holly does sing a few songs during this show, and it was actually pretty cool to hear, her diction was a little clearer and what's surprising is that she didn't seem to be singing as Pixie Lott, but as Holly. Lott has a lot of passion as a singer and actor, but she needs to work on her clarity before stepping on stage.

To be fair in this review I have captured the good points of the show which are mainly in the production value, the use of lighting, set and sound was superb. Each time a new set came down from the theatre ceiling, it presented a clear visual understanding of where the characters were, whether it be in an apartment, a back ally or Brooklyn bridge. The settings created a dynamic view of the theatre, which really created a forth wall between the stage and the audience. The sound was very crisp too, for example when journalists came on stage, a camera flash sound effect would pop up as they read the headline of the latest news which in my opinion is a clever way to use a sound effect. The lighting was used wisely, with each new set, the light adapted to it, creating a new atmosphere to the stage. There was very good use of spot lights, and there wasn't the standard usage of backwash lighting where the whole back of the stage was lit up in the same light.

I must mention the costume changes too, there were plenty of changes in costumes that suited the settings, such as dressing gowns to business clothing. I must compliment the Stewarts at the theatre too, they were very kind and welcoming as they politely took my order for a drink and Ice cream which was delivered to me at my seat in a nice little bag, which is one reason for me to smile during this performance.

There's nothing much I can really say to encourage you to go and watch Breakfast at Tiffany's, however if you're looking to work backstage in theatre you should go and see it. There are plenty of improvements needed in the script, such as shorter dialogue, and characters that are easier to connect to. In the end I was left unsatisfied, I don't plan on seeing this play again. Maybe I just saw this play on a bad day, but that's not really a reason to give it a second chance. 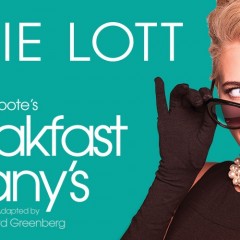 Breakfast at Tiffany's has amazing production value, but the actors have much to learn from this show. It is a play I don't recommend to see unless you are looking to work backstage and wish to learn what good .