Voice MagReviewsLove You To Bits

Love You To Bits is a very interesting point-and-click game for smartphones. The main character is Kosmo, a small and cute human who is trying to find all the pieces of Nova, his robot girlfriend. She has been destroyed after an explosion and her pieces have scattered everywhere in the galaxy. Every level follows the quest of the young protagonist on a different planet.

During his adventure across the galaxy, several secret objects are hidden on the planets, which connect with the memories of his robot girlfriend. Every object discloses a short animation clip — funny flashbacks on their life together. This mixture of games, animation clips and, occasionally, comics strips is what enriches and differentiates this game's quality compared to other IOS or Android games.

Compared to other puzzle games, Love You To Bits is very intuitive. It's easy to learn how to move the main character and the objects in this small world. However, do not mistake the cuteness and the pastel colours of some levels as signals of an unchallenging game. There are parts that require strategies, quickness of action and a good memory of the different sub-levels to unblock the prizes.

The degree of engagement increases considerably from level to level. There is not only an interest in resolving the puzzle story and collecting the missing parts of the robot. It is also incredibly enjoyable exploring this beautifully designed world. Nothing is built at random. Every character is integrated into the story and has their own peculiarities and background. Every small part fits this micro-world; from flower pots to weapons, from minor characters to key elements.

The soundtrack is also surprisingly rich and variegated for this genre. It is more common to find few themes in a game, which repeat themselves in a loop with small variations. Love You To Bits, instead, has a beautiful track for every level, which deserves to be listened to with headphones. The songs on the background are not just for the sake of having some sound, which can be switched off at any time. They characterise deeply the atmosphere of the game.

Love You To Bits is the recipient of several awards nominations—both last year and this year—such as Best Upcoming Game nominee for IMGA 2016 award. The game is developed by Alike Studio and Pati.io.

Here you can have a sneak peek at this cute sci-fi world: 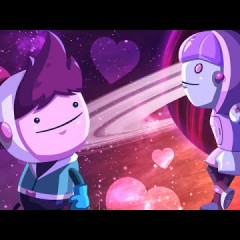 Love You To Bits