Physical comedy, demonstrating how you can laugh hard with no words uttered. A great expression of emotion and the versatility of custard.

I love seeing new theatre. But in all honesty I don't make enough of a habit of it. I have however made a few more local comedy gigs of late and the organiser of these has been rehearsing this new piece of theatre. Hosted by Arts Award Centre, The Attenborough Arts Centre in Leicester, Hap (Less One) is a one man show. Simple set-up with the setting being an almost empty flat, ideal for the venue we were in as a black box theatre space. The show's blurb gives you the idea:

"Meet Hap, the most useless being you will ever meet. This guy has no idea about anything. We find him lost and alone after being abandoned by his girlfriend (we have no idea how he got one) as he learns to fend for himself and genuinely function like an acceptable human being. Unfortunately he isn't really much of a human being, he's just a bloody clown."

The show opens with Hap lying on the floor already covered by a sheet, and charts his slapstick comedy attempt at getting dressed. We are introduced to the context through a simple but very effective device - a voicemail played to the audience. The following hour tells the story of Hap and his ex-girlfriend, with audience participation at many turns. There is raw emotion in this play. Expressed through facial expressions, gestures and body language. The highs and lows of love are well explored and you can't help but connect with Hap.

The execution of the play was brilliant, and it was hard to believe this was the very first public sharing! There was an audio hitch towards the end but it was dealt with onstage fantastically, in fact it was only afterwards that I found out what was really supposed to happen. With the level of audience engagement, I'm sure every show will have a different dynamic.

A highly recommended show that you should look out for when it's on tour! For tour info do see the website: http://fowlhumour.co.uk/ 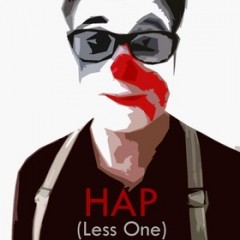 Physical comedy, demonstrating how you can laugh hard with no words uttered. A great expression of emotion and the versatility of custard.