When I heard that Creed was going to be released, it was a huge fanboy moment for me. I absolutely loved the Rocky series. However, whilst I was excited, a part of me was worried; sequel's don't always deliver.

Classic film series should, in many cases, just be left alone. So I didn't know exactly what to expect before watching the film, but I certainly had my opinions now. Let's talk.

I'll start off by saying that Michael B Jordan (who plays Adonis Creed) performs the role exceptionally well. He plays the role of a young man with a lot of talent, and a lot to prove. He didn't only have to prove himself in the ring, he wanted to prove to everyone else (as well as himself) that he wasn't a mistake. Adonis was very set on making a name for himself, and not just relying on his father's name. His mother was extremely against him fighting, but this didn't stop him from doing so. The violent lifestyle that Adonis leads reminds his mother of his father, and more specifically, how that lifestyle killed him.

Sylvester Stallone also delivers, but this wasn't much of a surprise to me. He plays his same old character, with of course, a lot less fighting. Stallone's character fills the role of Adonis's mentor, even though it takes him a lot of convincing to do so. When he finally does come around, he puts Adonis through his paces. There are some more incredible training scenes, and some pretty emotional moments between Rocky, Adonis and his family.

In true Rocky style, the final fight is absolutely mental. The entrances are amazing, and the build up to the fight feels extremely realistic. Once they get into the ring, it's brutal.

This film is incredible. It's not easy to follow in the footsteps of such an amazing series, and create a spin off so many years later. Many young fighters will relate to this storyline. Especially their mothers worrying about them getting in the ring and having to continue despite their discomfort. This is quite likely something that happens regularly. In the sports world, many athletes are expected to follow in the footsteps of their fathers if they had a great career, and this is usually way too much pressure for one individual. Most of the time, the individual wants to be known for themselves, and not their fathers.

The Rocky storyline was also quite unexpected for me, and it added a whole new dimension to the movie. There was more than one fight going on, but Rocky's fight was very different. I was also extremely impressed with the entrances. They were just brilliant. Creed walked in to Tupac - Hail Mary. Conlan Walked in to Krept and Konan - Better Not Waste My Time. If you don't know who Krept and Konan are, they are grime artists from London. Yes, grime artists from London featured on Creed! This is amazing exposure for Grime, and that song will reach people all over the world. I'm a huge grime fan, so that was another fanboy moment for me.

Overall, I loved this film. I've watched it twice now and will probably watch it again. If you have any sense, do yourself a favour and watch it yourself if you haven't! 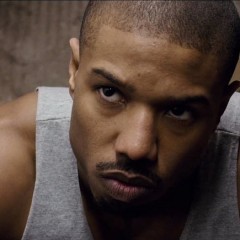 When I heard that Creed was going to be released, it was a huge fanboy moment for me. I absolutely loved the Rocky series. However, whilst I was excited, a part of me was worried; sequel's don't always deliver.