Marvel may have just solved their stale superhero movie problem

I love superhero films. They really call out to my inner geek, with amazing cinematic sequences, a real suspension of disbelief, and humour. It is indisputable that Marvel have ruled supreme over this genre, but their recent offerings have been lacklustre. Although films like Avengers: Age of Ultron have been huge blockbuster successes, there has a certain staleness to them. They have been very formulaic, not necessarily bad, but nothing new to get excited about.

20th Century Fox in particular has been a studio struggling to make something of its IP. X-men has been somewhat turbulent, and it's Fantastic 4 reboot was atrocious, and has basically killed the franchise. It was flat, uncreative, with appalling casting and worse writing. 20th Century Fox were ticking all the boxes on how to not make a superhero film.

I struggle to think of a film in recent years I have laughed at quite as much. The comedy of this film is on point, for all the reasons Deadpool is loved. It is crass, it is culturally relevant, and it self-aware. The character frequently breaks the fourth wall, and once, breaks the 16th wall - breaking the fourth wall within a broken 4th wall.

Ryan Reynolds has wanted to make this film for 11 years, and I can fully understand why. He was made for the Deadpool role. And thankfully, this time they didn't sew his bloody mouth shut.

The wisecracking, red suited anti-hero is on a personal vendetta, before his girlfriend is then kidnapped (not a spoiler - it was in the trailer). 20th Century Fox even reached ever so slightly into their wallets to provide Colossus and Negasonic Teenage Warhead - two minor X-men characters - to flesh out the cast.

The action was spectacular to watch, with plenty of comic book style graphic violence, and real gory scenes, something that has been notably absent from other comic book movies. Severed limbs, heads exploding, impaling. Dark stuff, but great to watch. The speed and fluidity of movement was a joy to behold, and the quips and jokes that accompanied that very rarely missed the mark.

Stan Lee naturally appears in the film, correctly described by the opening credits as 'a gratuitous cameo'. But even his appearance flowed nicely, didn't feel forced, and got a laugh from the audience.

The film is not flawless though. Deadpool, like many other films of late, has suffered from over-exposure. In their ever rampant pre-release advertisement, Fox showed us some of the key points from the film, somewhat ruining the surprises. At the same time though, it must be remembered that it was the leaked test footage that got the film greenlight in the first place, so I am less bothered.

However, this is more problematic when I also felt that the plot was a bit thin. I appreciate that Deadpool is a bit of a special exception when it comes to superheroes, with the emphasis on comedy, insanity and self-awareness, but that can only carry a film so far, and after a while, will fail to cover the absence of direction.

There was a lot to do in this film. They had establish the character, by giving us the backstory and selling the character to an audience who have only seen more family friendly super heroes at the cinema. Initially this was done by cleverly flicking back and forth between action and backstory, explaining how we had reached that particular point.

But once we are caught up to speed, the film falls back to a few overused superhero stereotypes, which is a shame given how great the first half was. This is not to say that the second half was bad, just that it was lacking.

I'm being deliberately vague to not ruin things for you, at the expense of good writing, but I promise you it's in your interest to read as little of the plot as possible, given how little plot there is.

A sequel received the greenlight the day before the film came out, so Fox are obviously aware they are onto a good thing. Hopefully they will be less stingey with the budget this time, and have more faith that people want to see certified 15 (R in America) comic book films.

Netflix has clearly received the message - both Jessica Jones and Daredevil were rated 15, and those were huge successes for the streaming service. Here is hoping that other Marvel (and you, DC, I still want to believe you can do good) take heed, and decide to get a bit more tongue in cheek with the formula. Deadpool for me should be the new standard by which Marvel films are assessed, it's the best thing they have produced in years. 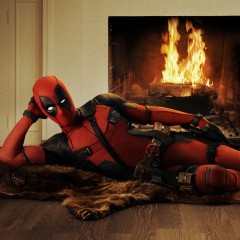 Marvel may have just solved their stale superhero movie problem