This is Tarantino's 8th film and to be honest, he's improving through the years.

Tarantino is like wine or whiskey or cheese, he gets better as he gets older. He recently said he would retire after his 10th film as he sees it as a good way to end; well people would be sad about that, he might want to consider opening a cheese and wine shop.

The Hateful Eight is a great watch - a classic Tarantino western that tells such a simple story in an endlessly brilliant way. The film opens on a beautiful snow-filled landscape, and with Western-style credits accompanied by a beautifully composed score by Ennio Morricone. Bounty hunter John Ruth (Kurk Russell) and prisoner and outlaw Daisy Domergue (Jennifer Jason leigh) drive through the heavy snow until they stop in front of Major Marquis Warren (Samuel L. Jackson), looking for safe passage before the coming blizzard. I won't spoil it for you but they end up in a cabin with Walton Goggin's, Tim Roth, Michael Madsen, Bruce Dern and many more, and from there the story gets bloody.

Aside from Tarantino's usual picks for cast, it was nice seeing Kurk Russell back on screen. The last role he played was Mr. Nobody in Furious 7, and half the audience who were born before the 90's didn't know who he was. Sam Jackson gives a flawless performance in this movie - possibly one of his best in a Tarantino film. One of the most memorable scenes was with him and general Sandy Smithers (Bruce Dern). For those who've seen the movie you'll understand when I say it wasn't comfortable for anyone in the audience; I'll be skipping that part out when the DVD comes out.

There is definitely a striking similarity to his last film, Django Unchained, although there are a few key differences. Django Unchained was more of a hero story, starting from the bottom and ending as winner with his gal; whereas Hateful Eight is more of a murder mystery, with many plot layers peeling off at every chapter. It was weird not seeing Christoph waltz as people expected him to make a cameo appearance, but Tim Roth played a brilliant role in this film.

Overall the movie was great, and truly one of the most beautifully shot films I've seen Tarantino do, he really made use of those 70mm shots. I would say the pace did feel a little dragged out in some scenes but it was worth it for Quentin's storytelling. This film makes the most of classic Tarantino - a man who can tell a great story, using classic film techniques and who's also able to work with a large cast of great actors.

So, here are my 8 reasons why you should see The Hateful Eight...

3) The action and death scenes are as bloody as you'd expect a Tarantino movie to be.

4) The cinematography is amazing (I'd watch it again just to study the shots).

5) The cast is amazing and each character is well developed.

6) The dialogue and story are as fantastic as ever.

7) The location and settings are great.

8) It's a Tarantino film (that should be the only reason).

We there you go, if you're over eighteen and love bloody western stories, I'd recommend seeing this. But in celebration of arts award 10th birthday I'd like to add two bonus reasons. 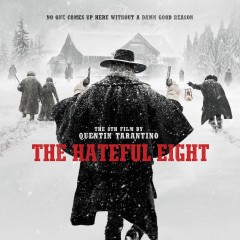 This is Tarantino's 8th film and to be honest, he's improving through the years.