A new film by Yorgos Lanthimos, set in a fictional world in which everyone should have a partner, but have only 45 days to find one before being transformed into an animal.

Colin Farrell is David, a man who found himself alone after his wife has left him for another man. In David's society it's compulsory to have a partner and 'loners' are not socially accepted. If they are found by the police, they are brought to a special hotel where they have 45 days to find a life companion. In case they don't succeed, they will be transformed into an animal of their choice.

From the beginning of the film, Lanthimos is successful in creating a plausible fictional world. The film is set in an unnamed European city and the woods nearby. The characters are people with normal characteristics and jobs. Only the rules, which regulate relationships, appear absurd to the audience.

Farrell distinguishes himself for his performance. As a middle-aged man, who is trying to cope with this dystopian world, he creates great moments filled with subtle humour. David struggles to fit with the strict rules and categories, from choosing the shoes size to define himself according to sexual binaries (or straight or gay). Farrell expressive acting highlights these situations and makes the audience understand the absurdity through humour.

From the first big blockbusters of his early career in Hollywood and the subsequent flop, now the Irish actor is regaining credibility. He has started playing the role of more complex characters. His physical appearance is no more the predominant focus of the film, as it was in Alexander. His performance in The Lobster and in True Detective shows another Collin Farrell willing to challenge himself with a different type of acting.

Lea Seydoux and Rachel Weisz also give enjoyable performances in the film — respectively the Loners Leader and Short Sighted Woman. They are two of the key figures when the focus of the action moves from the hotel to the woods. The woods are the place where the loners hide. They follow relationship rules which are opposite to the one embraced by the society, but are equally absurd. Seydoux plays very well the role of leader characterized by the inscrutability of her expression and by the assertiveness she communicates. Weisz, instead, has a completely different role. Her voice narrates and speaks to the audience throughout the entire film. She brings the attention to David's impressions, without being intrusive in the course of the action.

This parallel universe, with its absurd rules of compulsory relationships or self-imposed loneliness, gives the chance to reflect on contemporary human relationships. Reflecting on what seems so absurd, the viewers can then shift the focus to ourselves and consider whether we are as distant from this as we initially thought. In David's society, people are forced to find a partner because they are showed that life can be easier for a couple, and children are presented as the solution of couple's arguments. This is ironic of course, but it stands on the subtle line between reality and fiction.

Very important themes are managed with robust ability and the right attention, without resulting in being too difficult to digest. This doesn't mean they are treated with a light touch. Irony here is the real protagonist.

Please Note: Some violent content makes this film not suitable for an audience under an age of fifteen years old. 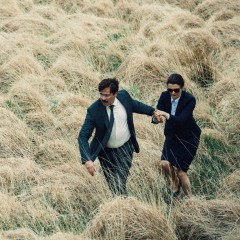 A new film by Yorgos Lanthimos, set in a fictional world in which everyone should have a partner, but have only 45 days to find one before being transformed into an animal.