The Avengers, directed by Joss Whedon is the second instalment of The Avengers Franchise which smashed its way to 2nd-best box-office debut ever through a boxing match blow.

Whedon delivers enough fun, action, and engaging team banter that fans will exit pleased but perhaps not giddy with joy. The film to me successfully contained an equal proportion of action, pain, sorrow and comedy to give the audience the thing they want most….the reprise of the Avengers.

This film entertained me with many elements such as the use of SFX which was amazing on the IMAX screen and therefore created a virtual world of orgasmic action which I believe everyone should experience.

However there are a few things which need to be addressed about The Avengers: Age of Ultron. One is the character development. Now don't get me wrong, there are plenty of characters in The Avengers but I believe everything to the rise of Ultron to the birth of Vision was too rushed for me and therefore very hard to consume everything that was going on and plus with the amount of action that was included gave me little breathing space to know what was happening. The group's central trio – Iron Man, Captain America and Thor – get very little in the way of story arcs, their involvement in the plot feeling totally clichéd (Tony Stark does create Ultron and appears to be going a bit Victor Frankenstein at points, but it's so short-lived and immediately forgotten that it's hardly worth including). Anyone expecting the divide between Cap and Iron Man, which will be the centre of next year's Captain America: Civil War, to begin here will be sorely disappointed.

Avengers: Age Of Ultron didn't really add anything into the mix from its predecessor and therefore to me didn't add a dark feel as it was marketed as a hopeless time for the Earths mightiest heroes. As a film buff I wasn't much impressed with the story line but for a mainstream audience this will serve its sole purpose which is to entertain by any means necessary such as a continuous use of puns, explosive action sequences and a romantic connection between the Hulk (Mark Ruffalo) and Black Widow (Scarlett Johansson).

In conclusion, The Avengers: Age Of Ultron is a film which Is for the astatically pleasing and therefore does not exactly invite something new to the screen personally to me and therefore was a success due to its star power and high budgeted special effects. 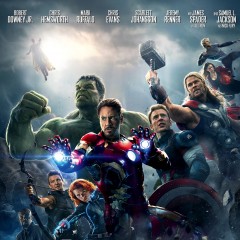