The Conjuring is a must watch horror film of this decade which uses typical horror conventions but with a twist.

The Conjuring was an amazing film from visionary director James Wan. The film was created in 2013 and was a hit in the Box Office and received many awards such as 'The Best Horror Film' from Saturn awards. The involvement of James Wan may explain the film's ability to embrace and obtain enjoyment from the expected, as the director of Saw, Dead Silence and Insidious offers up his fifth horror effort. With each, he has cultivated an understanding of the mechanics of the genre and demonstrated fondness in his immersion, with The Conjuring benefiting from his accumulated skill.

I love the way it made me feel very agitated through the use of sound which James Wan specialises in. Wan in The Conjuring uses non-diegetic sound such as high pitch violins to create an eerie and unsettling atmosphere with the use of Chirascuro, the idea of using one key light to create a dark effect which roots to German expressionism. The music is like a steroid in The Conjuring as it is the backbone in the film which created fear as an emotional response. This was amazing to me which in its own allegorical interpretation created a presence of a spirit as I was watching the film which created verisimilitude and fear in me as an emotional response. This therefore associates with one another to create the conventional horror of demonic which shows the idea that corruption is predictable which still has a shock value and therefore has the conventional element of possession in its grasp. This idea of low key lighting is a typical element used in The Conjuring and to create a dynamic atmosphere which shows the distinction of good and evil.

The genre of The Conjuring is the sub-genre of demonic horror. This contains many conventional elements such as low key lighting, a demonic presence, isolated location, corruption of innocence and dead bodies. In The Conjuring, the corruption of innocence swerves away from children since they do not become the possessed, instead it is the mother. This idea that women are pure vessels for corruption as Williams (1993) states "that the women are both the victim and monster, for she is responsible for the horror that destroys her". This suggests that females are the reason why the horror overtakes them and their loved ones due to their stereotypical representation of being weak. To me this was amazing at it showed me how Wan uses an idea and conforms it to fit in with society today.

The characters development was very well done as I was able to have a personal relationship with the characters and they were not cramped into the film so it was equally distributed with the back story of who Ed and Lorraine are.

In conclusion, The Conjuring, in my opinion was a well-developed film which contained many generic conventions of the demonic sub-genre which Wan cultivated in order to enhance the audience experience and expectations. 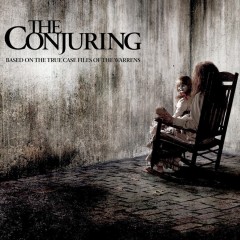 The Conjuring is a must watch horror film of this decade which uses typical horror conventions but with a twist.