Spectre is the fourth instalment of our blond, blue eyed Bond, and it continues the trend adopted by the second of Daniel Craig's take, by existing as part of the same timeline, with interconnected threads. It is done more so in this film than any other, pulling material from all of Craig's previous performances, referencing them blatantly and surprisingly subtle at points too.

The film starts with Bond in Mexico, attempting to assassinate a terrorist. From this he is thrown into a collision course with Spectre. Spectre is a secret organisation that orchestrates multiple, intricate networks of crime. Alongside this, British Intelligence is undergoing a massive reform, with a questions surrounding the need for the 00 program in the age of technology. How can human intelligence ever be as useful as drones, internet surveillance, and message interception? That is something the film seeks to answer.

For the more astute, you may realise that a similar conversation is currently raging in real life - how much surveillance is too much? What is the line between privacy and security? Do we know what the government is doing? Who has our data? Spectre is very blatantly a critical attack on institutions such as NSA, or the GCHQ. Other than the Russian antagonist plots during the Cold War era, this is the closest to a political commentary a Bond film has gone, and it is very obvious which side of the argument director Sam Mendes sits.

The plot feels very cut and paste - there is a secret organisation, James has to stop it with shooting, seduction and sharp suits. A pretty standard affair for Bond at this point. This being said, it is a beautiful film to look at. Bond films always benefit from spectacular locations, and Spectre is no different. London, Italy, Mexico, Morocco are all visited by our protagonist, and all of them conjure incredible envy and wanderlust. But even with this, and the more political tone it just failed to really resonate or captivate.

I struggle with my relationship with Bond. On one hand, I remember fondly growing up watching Pierce Brosnan, jet setting to spectacular locations, playing with all the cool gadgets, saving the day, getting the girl and so on. But as I've got older I've become increasingly aware of how flawed Bond is as a human, and have started to question whether he deserves to be held up as a role model, or something to aspire too. He drinks excessively, he is ruthless, he is a womaniser and a misogynist. Wherever he goes there is pain and inevitably death. And sex, let's not forget sex. With almost every woman he encounters. Regardless of environment or situation.

In this film, more than any other, his flaws are laid bare. The antagonist gets off on laying out all of Bond's failings, all of his mistakes, and all of the people he has failed to save. Bond is exposed, and his humanity is revealed. You can see that however stern and mercenary he may appear, he does struggle to deal with some of his choices. There is a conversation in which Bond contemplates what would happen if he stopped the killing and the constantly running forwards, and he said he didn't know That really hammered home his isolation, and how outside of his job there is so little to his life, making him almost as vacuous as the women portrayed in the series. In that sense, it made Bond more interesting as a character.

It feels odd to say I've possibly grown out of James Bond, yet it does feel the case. But more than that, it is almost like society has outgrown him. Behaviour that was acceptable during Fleming's time of writing, or the stereotypical behaviour of earlier feels feel juxtaposed with modern attitudes, and to some extent that is also addressed in the film. How relevant is Bond in today's society? Some will argue not very, while others could point to him as the embodiment of selflessness and bravery our servicemen face in real life. But now we are getting far to meta.

I wanted to save a bit of space for the theme song for Spectre, Writing's on the Wall by Sam Smith. In my opinion it isn't a good theme song. I don't think it captures anything that the Bond films are meant to be, lacking the intensity, power and spectacle that previous Bond tunes have had - excluding Another Way to Die, which we will all continue to try and forget. Equally, though, it could be argued that it's fitting for the film. Out of step with previous Bond films, lacking in the flair and bravado that comes with it, leaving you underwhelmed.

Spectre is the 24th James Bond film released, and after two dozen, the formula can start to get stale. Daniel Craig is a fantastic actor, bringing emotional depth to what has traditionally been a fairly one dimensional character. Likewise, Mendes has done great things in trying to make the protagonist more grounded in reality, and begin to make him more human. But in doing so, it strips away the last remnants of reverence, and left us with a more gritty, realistic outlook to the life of a field operative. It's not necessary a bad thing, but it does leave you questioning if Bond is the good guy. 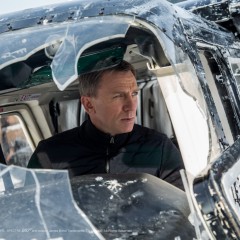