Voice MagReviewsHamlet at The Barbic…

The Barbican Theatre's new production of Hamlet has been highly anticipated for Benedict Cumberbatch's lead role and the star did not disappoint.

As a big Shakespeare and Benedict Cumberbatch fan, it is needless to say that I was incredibly excited for his role in Hamlet, and I had my tickets for the National Theatre Live screening as soon as I was able.

As much as I was excited, I was also quite worried that this production wouldn't live up to David Tennant's interpretation, which has been my absolute favourite. So I went with a mixture of excitement and nervousness.

Like many modern Shakespeare performances this play was updated, however not completely modernised, featuring record players and a casual-knit-jumper-wearing Hamlet. This is evident from the first scene, and the play begins with Hamlet, in a departure from the script, though this serves well to focus on his grief.

Cumberbatch was incredible in this regard. His grieving Hamlet was understated, and he brought out a deep feeling of sorrow in the character that is often lost in other versions. This was evident throughout 'to be or not to be...' in which his tears focused the speech as a genuine contemplation of suicide, without falling into the trap of being overly dramatic with these famous lines, a challenge he also achieved while humbly holding Yorrick's skull.

Equally his madness was played in such a childish way that it brought out the real comedy in the play, with him dressed up as a solider and playing in a toy castle; a refreshingly different portrayal. It also balanced out the decline of Ophelia well, which served as the much darker aspect in this production.

The staging was brilliant, with a permanent set of the castle interior being adapted to serve the movement from room to room. This changes at the end of the first act, after Claudius has prayed and gusts of rubble dramatically pour through the windows and doors to cover the stage. The rubble is then used in the second part for outdoor scenes, such as when Hamlet discovers the soldier's camp and for Ophelia's burial. It also serves as a symbolic reminder of the destruction that has occurred during the scenes inside the castle, in which characters consciously try to clear the dirt away from surfaces.

The final fight scene was also interesting due to a slight reordering of events, which significantly improved the timings, however was slightly jarring when Gertrude insists on drinking Hamlet's wine for no apparent reason after the fight has taken place. However the well-choreographed staging of this scene, like the chase scene earlier in the play, was a highlight and gave the production a dynamic energy that I have not really seen in Hamlet before.

Overall I thoroughly enjoyed the production and was in no way disappointed. I have realised that it would be unfair of me to compare Cumberbatch to other Hamlets, as each actor approaches the part in a very different way. However, I would say that he was a brilliantly entertaining Hamlet and also shed new light on the classic character. 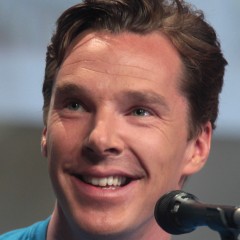 Hamlet at The Barbican Theatre

The Barbican Theatre's new production of Hamlet has been highly anticipated for Benedict Cumberbatch's lead role and the star did not disappoint.