A classic film that is still held in high regard to this day.

This isn't exactly a new film, but a powerful one nevertheless. I hadn't heard of or watched A Beautiful Mind until a few months ago. After watching this film, it automatically became one of my favourites.

I didn't know what to expect when I began watching the film. I hadn't looked at the descriptions or trailers, I just dived straight in. I was aware that it had a focus on mental illness, but that was about it. I wasn't too sure on the details, which I found made the experience of watching it even better. The story was fairly easily to follow. A man named John Nash was studying at Princeton University, and quite quickly became close with his roommate Charles Herman. John was clearly an intelligent man, and was eventually offered a job at MIT.

A few years pass and John is shown cracking a code at the Pentagon, everybody around him standing in amazement. He continued on this line of work and eventually came into contact with a supervisor of the United States Department of Defense. John was given many assignments by this man, but was mainly required to look for patterns in newspapers that the Soviets had apparently put in place. Nash dedicated a huge amount of time to his assignment, and worked extremely hard.

As I wasn't aware that this film was about Schizophrenia, I was buying everything. I thought this was a genuine story about an intelligent man whose mental issues surfaced when he was given these assignments. I was in for a shock.

After John Nash witnessed a shootout between Parcher and Soviets, John was left deeply disturbed. This seemed to be the moment that he realized how deep he had gotten into this. Nash attempted to escape, but to no avail, Parcher wasn't letting him go. The turning point was at a conference, when Nash was sectioned and this was where it became evident that Nash had Schizophrenia. The rest of the story followed his treatment, recovery and family life.

I was quite shocked to find about about Nash's condition. Obviously I would have had a different experience if I had done the relevant research beforehand, but this film touched me in many ways. Firstly, I recognized what an amazing job Ron Howard did directing this movie. He truly put the viewers in the eyes/mind of a schizophrenic. Nash's experiences appeared incredibly real to me and probably even others who knew that he was schizophrenic. I realized how real the experiences must appear to a real schizophrenic, and how difficult it must be to determine what's real and what isn't.

Another reason this touched me was due to me having family members who have been schizophrenic. I have never been able to fully understand their experiences, and probably never will. However watching this film enabled me to recognize how much this condition affects your life and those around you.

I will never forget this film. In fact, I am quite surprised that I hadn't watched it sooner. All I can say is watch this film if you haven't already. You're seriously missing out. 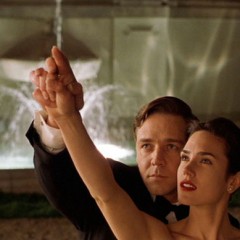 A classic film that is still held in high regard to this day.