The film was made by the Ancient House Teenage History Club and Lynn Youth Forum in association with Kids in Museums to suggest ways to make museums better from a young person's perspective and as the film states 'show how simple this can be'. In the film many useful recommendations and points for improvement are made that all museums can take on board. The film runs through a series of questions and answers about museums, which I thought was a really good way of making the topics that they raised very clear, as you are first introduced to the point and then shown a specific example in the museum. The first question asked was: 'Did the museum feel welcoming?' We are shown clips of what it is like when you first step into the museum and then we know the question can be answered positively. The next was: 'How did you hear about the museum?' They explained about the rise of social media to publicise places and events and how important it was in this day and age to run a successful project/organisation. They suggested a specific place in the museum where you could take selfies which could then be used by the museums twitter to publicise it – this place was the 'Hipster Horse' which was invented by dressing up the museum's horse statue, a brilliant and fun idea which will definitely get the younger generation involved!

The next question asked whether the museum was suitable for all ages, in the film they showed some amusing clips trying on clothes from the dressing up section that were far too small and thus highlighting a point that was discussed in the panel afterwards; that there could be more dressing up and interactive opportunities, including shorter and more memorable audio guides. They also spoke about the quality of the signs and information in the museum. They thought the signs were okay but could be made better, making a good point that the simplicity of a sign can make all the difference to a museum experience, as sometimes people can be a bit tentative to use things in the museums because they are unsure whether they are allowed to. Putting a sign up to encourage visitors would overcome this issue – and it is such a simple, inexpensive solution. They finished off the film by each showing which part of the museum was their favourite part, this included the big model of a stuffed fish which they aptly named 'Le Fish' and the striking 'Boris the Tiger' who stands at the entrance of the museum. It was really brilliant to see what a variation of things captured their interest.

What was great about the film was to see young people actively having an opinion about museums and being genuinely interested in ways to make them better. With a place preoccupied with the past it only seems right to get the people of the future to reflect upon it and make suggestions to better it for the present. The film did an excellent job of getting the message across and you can tell a lot of effort has been put into making it, and to great success. I was very glad to be given a DVD of the film to take home with me and hopefully it will be online soon (if it isn't already) for all to see. It was inspiring to see young people being in charge of a project like this. Museums and heritage are so important; it forms a part of identity and is vital for learning about the future, as well as the past. As said by a young person taking part they are important because it 'keeps the past alive for future generations.' (http://kidsinmuseums.org.uk/teen-take/) 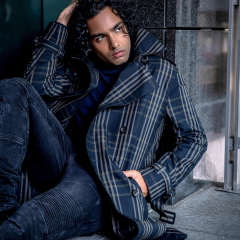