A dark yet eccentric display of sketches which could sully the purest of imaginations.

The show I looked forward to most at the Fringe was Volume II having marvelled at Volume I last year. They were in a bigger venue in front of a bigger crowd to throw around a mostly new batch of sketches to make us wince.

For some reason, the last thing I was expecting was for the trio to come out in nothing but their underwear and get dressed in front of us. They proceeded to mimic the action film slow motion character intro in a surprisingly impressive realism.

The next hour was filled with their signature quickfire sketches ranging in their controversial themes. Some of them were just completely immature – the antitheses of their more adult, darker counterparts. The transitions between different sketches were completely seamless and they did the whole addressing the art of comedy thing.

The audience lapped up what Gein's is all about, as when the darker gags were made, the more ferocious laughter emerged. The laughter was periodically mixed in with the moo-ing that comes from how close to the line of tolerance the humour was.

Whenever I think of Gein's Family Giftshop, I imagine them sitting at a round table making death and poo jokes, deciding whether they're funny or not by way of hysterical laughter, and then trying to perform them as sketches randomly.

Unexpected, silly and erudite all at the same time. They bring something formidably different to sketch comedy with their sheer minimalist approach and the ingenuity and originality of their sketches. They don't wish to be pretentious or say anything great or meaningful, they just wish to commandeer the sketch comedy scene and make it witty and clever and not convoluted. Some things, like the costumes, you'll never make heads or tails of, but I'm happy not to.

One of the few acts I saw to throw me forward with laughter. The throwbacks to volume I were picked up and fun homages to their previous work. I can only wonder what they'll pull out of their maniacal comedy minds next.

Catch Gein's Family Giftshop: Volume II in the Pleasance Beneath in the Pleasance Courtyard for the rest of the Fringe except 17 August - https://tickets.edfringe.com/whats-on/gein-s-family-giftshop-volume-2 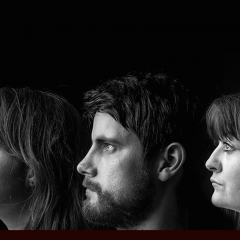 A dark yet eccentric display of sketches which could sully the purest of imaginations.