Voice MagReviewsYianni: Why Did the…

Australian Yianni almost crosses the line, in the funniest way.

Yianni is one of those comedians that are funny for being truthful.

His honesty on the subject of comedians, and lines they should and shouldn't cross, opened up the show. He shares with us his experience of times when he was restricted to be less offensive, and told to not mention certain topics.

The Australian started off quite slowly by learning all our names and gradually built up jokes for bigger laughs. His show was based on how far comedians can take their jobs before crossing the line and offending someone, hence the title.

What was interesting was how honest people were when answering his questions. He explains how people have multiple faces they show to different people. For example he told us how people reacted when he mention his mother was in the room at a comedy rap battle and how his friend basically made a sex joke about his mom despite knowing she was there. By the way he described it was absolutely hilarious. He went as far as to include religion and respectfully made fun of Christianity, making everyone laugh.

I have to give him great credit for the amount of energy and effort he still put into humouring such a small crowd because some comedians need the roar of a crowd to boost their appetite for the show, but Yianni proves that he is worthy of performing at the Fringe.

What's surprising was he even managed to do perform a song, containing some of the most offensive words in the English language and still gets a standing ovation. 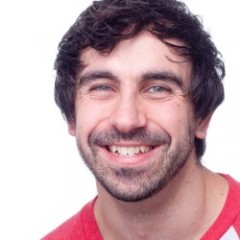 Yianni: Why Did the Chicken Cross the Line?

Australian Yianni almost crosses the line, in the funniest way.