A show with good ideas but failed to make an impact.

I will confess I found the plot to be confusing. The underlying theme was multiple-personalities, who have all contributed to Floe-Joe's debut album. The transitions between the three characters was pretty cool, but the characters themselves fell flat. There were a few comedic moments, but largely I was waiting for the music and dance sections.

We have previously reviewed Floe-Joe's Faces in Brighton, and it was well received. This demonstrates that the show does work. I spoke to Ben after the show, and he is an incredibly genuine and friendly individual. Even though he had performed to an undeservedly small crowd, he still put on a fantastic performance, demonstrating his ability as a dancer and a musician.

The characters he portrays on stage are all larger than life, very dramatic, and all troubled in their own way. They all interact with the audience, preying on them, pulling them up on stage to learn dance moves, or simply recalling a positive thing that happened to them that day. It was endearing, disconcerting, and invigorating.

Despite this, it was difficult to really feel connected to the performance. It had funny moments with stinging comedy, but these were very infrequent. There were large periods where the audience observed in near silence as Ben worked on stage. Perhaps Floe-Joe's faces should be viewed more as a theatrical piece, as opposed to comedy. In which case, it works better. It has clever moments, and good music, but felt stifled. Something was missing to really give the show a feeling of completeness.

This review is perhaps not a ringing endorsement of the show, but our previous review is testimony to the talent Ben Fairey has. I think the show works best when the room is full, so grab all of your friends and head on down. 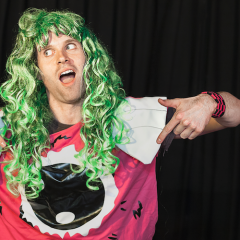 A show with good ideas but failed to make an impact.