A show about suicide and sex - this is the Edinburgh Fringe.

We have already reviewed one of John Robertson's shows, The Dark Room: Symphony of a Floating Head, and it received 5 stars. However, we didn't realise this until near the end of the show. Had we been aware of it, then we wouldn't have been at all as surprised as we were as to how amazing his show is.

The Australian comedian recently lost his best friend to a suicide. She was the one who got him into standup, and he decided that the best way to commemorate her was to do a show. It was beautifully touching, and you could see that Robertson was still raw over this tragedy. Rather than detract from the experience, it added to it. The moments of vulnerability left our defences down, and Robertson exploited that to hit us with a hilarious joke, flipping the mood of the room on its head. At the back of your mind you will feel bad for laughing. However, you can't help it, and as a comedian, and somehow who is dedicating the show to his friend, Robertson will want you to laugh hard and often.

His jokes are very crass, although nothing you wouldn't hear while walking down the street. His content touches upon S&M, crossdressing, suicide, heckling across the world, video games and relationships. His stage presence is loud, domineering, but equally, quite skittish. An air of self-doubt, or embarrassment. Then of course there were the times where the memories of his friend knocked him back a bit, and the show slowed in pace, but not in a negative way.

Sally and I both went to see this show, and we absolutely loved it. The content is dark, and could possibly be triggering, but it is an incredibly funny, and witty show. If you think you could stomach the content, you should definitely check it out.

John Robertson: Let's Redecorate is performing until the 30th October (not 17th) as the Stand Comedy Club 5&6 (Venue 319). It is strictly 18+, and tickets are available from the Fringe website. 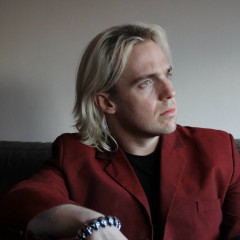 A show about suicide and sex - this is the Edinburgh Fringe.