An energetic start with immediate laughs that lasted.

Adam presented a good show of observational humour that had most of the audience laughing from the outset. He used the increasingly common device of introducing himself using a list of things about him. However this was a tool he managed to use twice more for a total of 30 humorous quips which many young males (in particular) could relate to.

It's a shame audiences love to laugh at people derogating themselves; but Adam handles it brilliantly and makes light of his less fortunate times in a very engaging way.

His engaging style not only comes from excellent observation skills which points out the lighter side of life, but in the expressional way he performs, and really 'owns' the stage. His physicality, his facial expressions, and his descriptive imagery present an enjoyable time for audiences at the front & back of the room. Not many people will liken their career trajectory to the clear struggle a mermaid would go through to get on a high rock (normally unseen) with no legs, but when they do achieve it's a beautiful thing.

I wanted to mention some more of his imaginative visual comparisons but I won't spoil the show.

What could have spoiled the show was an unfortunate audience interaction. Picking an audience member who didn't quite take to the stage like a fish to water. But hats off to Adam who handled it brilliantly, made light of how the section didn't run smoothly with the audience member on stage stagnating the show slightly, and continue his very physical & expressional comedy that really kept it moving. An excellent save which is not a skill everyone can claim.

The only real disappointing factor was the lack of any great overarching narrative or connectedness. It was more a collection of good jokes and observations with no real throughput. So much so that he could have ended on a real high about 45 minutes in. It also contains a significant level of swearing, which isn't everyone's thing. But that's a matter of taste and not something that instantly puts me off, so it's only a word of caution.

If you're an 18-30 year old male, or a female friend of any such person, then there's plenty to laugh at in this show and is a recommendation for an early evening venture.

For tickets and more information visit the Fringe website 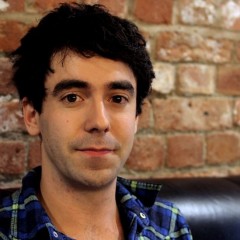 An energetic start with immediate laughs that lasted.