I take pride in having predicted the winner of The Amused Moose Laugh Off Final for the second year running.

Ian Smith, not Tony Law, as Smith obsessively tried to point out, hosted the Amused Moose event at theSpace @ Symposium Hall. A charismatic Yorkshireman who took to the art of comedy by showing off how good at it he is. Albeit as a statement of how bitter he is about his dwindling success in the contest he was hosting.

He was a perfect host – incredibly funny conjuring raucous laughter from the crowd – readying us for the inevitable hysterics ahead. Nine acts, six minutes each. Let the fun begin.

First up was Colin Chadwick who stood and told a raft of subversive jokes. He was an expert in setting up one-liners, the gags of which were far from what we were expecting. His confidence was what made his routine stand its own and it was contagious.

Mo Gilligan came next filling us in about his life with anecdotes about his childhood and his family. He had a great deal of charisma which enabled him to command the audience with great ease and a well-rehearsed balance between light-heartedness and crude humour.

Next was Tamar Broadbent who performed her comedy through song and keyboard playing. She has a truly lovely voice almost distracting from the comedy. The song was well-written with surprisingly musical rhyme and not to mention the humour, which came completely naturally through its performance. Her routine/song covered the nature of 'casual' dating and the experience of the seediness and sordidness of it all.

Jay Hampson shocked the world – or at least the auditorium – with his uber high-pitched voice. It was something he knew had the effect of making us giggle without saying anything remotely funny past 'hello'. He went down the route of self-deprecating jokes about the aforementioned voice, being a Northerner, Wythenshawe, his family and his socio-economic status. What set him apart was the meowing at the end of each of his mimicking impressions. These got huge laughs. Very fun.

Luke Courtier sent us into a lull with his bombarding, masterful voice. The RADA graduate performed a ditty about his comically dysfunctional relationship with a 'Tabitha' and how generally accident prone he is. His voice was sublime but the comedy was hidden behind it.

Daniel Audritt certainly played it the safest of the lot. He performed a routine about his former relationships. Observations which were still funny but certainly already established. He went with 'if it ain't broke, don't fix it' which in itself is naughty. A bit of risk and originality is what is needed at this point.

Sophie Willan was exceptionally northern. Her stand up routine was perhaps the most trialling as she addressed psychosis and mental health with an erudite treatment of the two which wasn't encumbered by being too emotional.

George Lewis stood out as the funniest. At the very least because every single one of his gags got full laughter including by me. He riffed on his relationship with his unlikely girlfriend, made grammar jokes work and plenty of intuitive subversive humour based on pun and wordplay.

Finally strolled on the super-confident James Loveridge who made a great deal about distancing himself from how laddish his accent makes him sound. He did impart to us a great trick for a Facebook sabotage which perhaps got the biggest laugh of the show.

George Lewis is a deserved winner. He bounded on with his geeky self-assurance and made the audience erupt. Mo Gilligan and James Loveridge were fervent competition as runners-up! 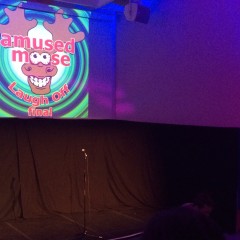 The Amused Moose Laugh Off Final 2015

I take pride in having predicted the winner of The Amused Moose Laugh Off Final for the second year running. 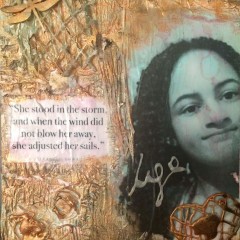