Awsum upped the ante with the stakes of ridiculousness in his show this year. The laughs he got in the packed out, sweltering venue were some of the loudest I'd heard yet.

He even managed to conjure Jai McDowall, the winner of Britain's Got Talent 2011, out of the audience to be his main contributor unaware of who he was messing with.

His concoction of musical stand-up and audience participation made for an arsenal of gags which were sure-fire successes. He made much of the fact that we'd seen him in a few adverts in recent times and chose to explore a great deal many of the audience's personal stories. He also did very well to endure the heat in the room, he was practically swimming in his own skin juices.

He worked with props and made his audience work with the props, musical or otherwise, to bring a distinctive childishness to the routine. The adult audience descended into giggling, cheeky, heckling giant babies – but not in a rowdy way but in a confidently definitive way and this kind of reaction gave Jonny the kind of propulsion that I think got us through it. Consistently huge reactions from the audience and a giddy BGT winner took us from a cheesy attempt to extract any organic humour from the audience to a fairly expert construction of the audience into a humour making machine.

Where this routine lacked though, was a distinguishing amount of originality. A lot of the quips from which derived extended gags were just slapstick off hand comments or a similar version of something funny that the audience did and this seemed to lead the show more than Awsum himself. Credit to him for being the catalyst of all this but there seemed to be too much that was left to the audience to be the source of fun. The last thing Everything Is Awsum needs is an adult styling but what it could benefit from is a bit of original ingenuity from the comedy.

Awsum needn't grow up, he needs to be the one to take control of his routine, though.

Catch Jonny Awsum: Everything Is Awsum on the Balcony at the Gilded Balloon at 22:15 for the rest of the Fringe - https://edinburghfestival.list.co.uk/event/475288-jonny-awsum-everything-is-awsum/ 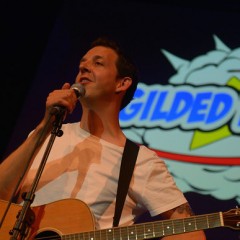 Jonny Awsum: Everything Is Awsum

Awsum upped the ante with the stakes of ridiculousness in his show this year. The laughs he got in the packed out, sweltering venue were some of the loudest I'd heard yet.