Politics, being Scottish, McDonalds, dieting and vegetarianism are the order of the day for this standup show, with BAFTA nominated Iain Stirling.

Standup comedy has a formula: Comedian + Audience + Life Events + a microphone = Standup. This show does little to alter that formula, in fact it largely sticks to the standup staples, audience banter, politics, and perhaps a little too much self-deprication. Indeed this show brings nothing revolutionary to standup comedy, but it is incredibly funny, with much of the audience brought to tears from laughter!

Stirling's delivery is superb, and incredibly well paced, however, there were some points where jokes fell flat, and a lot of the build-up was boring, but it always lead to a great joke, provoking some proper belly laughs from all. While it is almost a given that all comedy shows are planned and rehearsed beforehand, many feel organic and conversational, unfortunately this was not the case with the performance that I saw, the transitions felt laboured and forced, although I appreciate this was a preview show, so perhaps Stirling will continue to improve as the show goes on. He certainly has the potential!

The jokes have the potential to be offensive, if you are of a delicate disposition, due to a long section based on what is arguably the most offensive swear. But as with all standup, you have to go in with an open mind, and a bit of a thick skin. There are jokes of a sexual nature, and if you're sitting in the front few rows, be prepared because there's a chance that you will be included.

If you're a fan of standup, or a fan of Iain you will know exactly what you're in for! It's funny, opinionated, but falls a little flat at points.

Iain Stirling: Touchy Feely is on at the Pleasance Courtyard until the 29th of August. Performances start at 19:40 and last for an hour. Tickets cost £8.50 Monday to Thursday, and £10.00 Friday to Sunday. Seating is unallocated, so arrive early to get a good spot! This show touches on adult themes, and uses a lot of strong language. For tickets and more information, please click here. 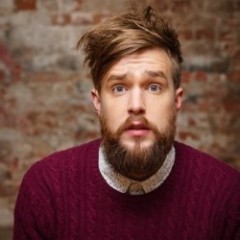 Politics, being Scottish, McDonalds, dieting and vegetarianism are the order of the day for this standup show, with BAFTA nominated Iain Stirling.