Female comedy sketch group should be charged with GBH for splitting the sides of their audience.

Make no mistake, these girls are no kittens. Would they go as far as to kill a kitten? I don't know, but there wasn't much left pure after they had finished! I left the show feeling violated, in the best kind of way. Their humour is shocking, offensive, clever, quick and innovative. The twitter hashtag for the show #Ifingeredakitten. That should tell you everything you need to know about this show.

In this hour of debauchery, Fran, Kat and Perdita comment on the 'dick pic' phenomenon, tax on tampons, ruin Jurassic Park, and probably get horribly close to the truth of the Flower Pot Men.

They trio had the crowd eating out of their hands, and nearly every sketch was met with raucous laughter. I thought I would be safe to take a drink and ended up choking on it due to laughter. There were a few points where the room quietened a bit, and I felt that a few of the sketches played to heavily on similar characters. It didn't detract from the overall performance though.

Audience interaction was great, and I found myself simultaneously wanting to be picked out, and hoping that they'd pass me unnoticed, to spare them my awkward stammering.

If you have a dirty mind, aren't offended by strong swearing, or want definitive proof that women are funny, you need to see this show. Kitten Killers are hitting Edinburgh hard, and just a few minor issues kept that elusive fifth star from their grasp

Refreshingly clever, beautifully crass, and we got glow sticks!

Kitten Killers are performing at the Wee Coo everyday (not 19th). For tickets and more information, visit the Fringe Website. 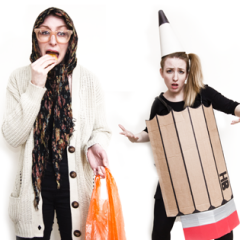 Female comedy sketch group should be charged with GBH for splitting the sides of their audience.