My Broken Language is a powerful memoir about identity, home, and family.

My Broken Language is a memoir by Qiuara Alegría Hudes, a Pulitzer Prize-winning playwright. Born in West Philadelphia to a Puerto Rican mother and a Jewish father, Qiuara was raised between two cultures and two languages. Inspired by the women of her family and at the behest of her activist mother, Qiuara set out to tell their stories. But the more she delved into her family history, the more she came to see the societal issues Latina women are faced with. As her search for a way to do her family’s story justice deepened, so did Qiuara’s sense of self and artistry.

My Broken Language is a beautifully written, lyrical novel. Laced with lush and thought-provoking metaphors, Qiuara proves herself a master of language. Through her writing, Qiuara effectively expresses the difficulty in expressing yourself through language and in finding your voice as a bilingual, biracial identity. In this sense, Qiuara’s memoir stands as a testament to the power of the spoken and written word. In addition to the beautiful writing and blend of Spanglish, it was wonderful to see the multitudes and hues of Latin culture portrayed. Qiuara describes family gatherings, cooking and food, music and Latin-American spirituality (Santeria) with depth and tenderness. Qiunara’s descriptions of Latin tradition work to successfully drive home her point of struggling to find her place in the world as a biracial identity. The traditions are ones that she struggles to initially understand and join in with, and traditions which are muted by her Jewish father.

Moreover, the stories Qiunara recounts of her cousins and female family members are magnificent. Their stories are, for one, heart-wrenching in the societal issues they expose, a history of marginalisation and abuse of the Latin community. Her mother’s story exposes the way Latina women have historically been oppressed by white feminists, disallowed the opportunity to have their voices heard and their own community vouched for. Meanwhile, the stories of her cousins demonstrate the way Latina women experience poorer health care and education than white women. One relative's story even delves into the involuntary sterilisation and experimentation on Latinas. Nonetheless, their stories are also uplifting. It is through their stories that Qiunara comes to find her identity and solidifies herself as an artist. Through her family, Qiunara is able to speak up for all Latina women.

Overall, My Broken Language is a bold memoir that explores identity in all its complexities as well as the extraordinary nature of language. 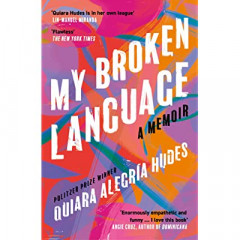 My Broken Language is a powerful memoir about identity, home, and family.