Between the 20 September to the 12 November 2022, the Royal Shakespeare Company will be performing its First Encounters production of Twelfth Night in schools and theatres up and down the country. Starting in Birmingham, the production will travel to Northampton, Cumbria, Blackpool, County Durham, Middlesbrough, York, Bradford, Hull, Nottingham, Newcastle-under-Lyme, Suffolk and Stratford-upon-Avon.

Aimed at bringing Shakespeare and live performance to those who have never seen his work live and to younger audiences, the tour focusses on visiting areas of structural disadvantage. Using edited versions of the original language, First Encounters with Shakespeare productions are 90-minute, abridged versions of Shakespeare’s plays.

For information about venues, times and tickets, https://www.rsc.org.uk/first-encounters-twelfth-night/tour-venues

Here, a year nine pupil at Selly Park School for Girls in Birmingham, gives her take on the production:

The RSC’s Twelfth Night was a remarkable take on the time-honored classic that Shakespeare had written 400 years ago. The set was an alluring burst of colour, with many fantastically designed props which brought the city of Illyria to life. Zainab, a primary school student who had watched the marvellous production, said that the set ‘reminded her of a party, as it was really bright and eye-catching'. The décor was intricately detailed and relevant to the play’s plot (the coral reef was depicted on pillars, displaying the shipwreck Viola and Sebastian had experienced). Two doors, one orange and one blue, served as clever ways for the cast to enter and exit the stage. These decorated doors represented the house of Duke Orsino, who was helplessly infatuated with Countess Olivia, the blue door’s owner. Kaleidoscopic costumes represented the characters; Sebastian’s and Viola’s costumes reflect a shipwreck, a deep-sea blue with connotations of sadness, and net accessories. Olivia’s costume showed wealth and power, due to the actor being adorned with jewellery.

The atmosphere created was incredibly lively, and the multi-talented actors brought excitement to the audience. Throughout the play, the audience was encouraged to get involved with the story-telling in child-friendly ways, exposing young children to the world of Shakespearean language. The cast repeatedly addressed the audience members directly and asked them to participate with the production, which excited the students -who eagerly volunteered. The script was humour-based, with comedic scenes leaving the room erupting with laughter. The jester, brilliantly played by Alice Blundell, was an especially hilarious character, who interacted with the audience continuously. The scene in which Malvolio’s new appearance was revealed (due to the mischievous acts of Maria and Sir Toby) contained an engaging comedic reveal. Pop culture references kept the play fresh and modern.

The music that was played in the production by the actors themselves reflected the mood of the scenes expertly. In the beginning scene, the party scene, the music was upbeat and buoyant. Suddenly, the tempo of the music slowed down and became slightly haunting to foreshadow a tragedy: the shipwreck. In the final scene, the music was, once again, cheery and sanguine to show the love-filled ending.

The characters grew throughout the play, which is evident. Malvolio’s personality had changed throughout the play, from stern and sombre to amative and unhinged. Olivia had also become more attentive and expressive regarding emotions towards the end of the play, showing the character growth Shakespeare highlighted in the ending of Twelfth Night. However, these subtle changes in behaviour were exaggerated in the production, so that the audience (9-12 year olds) could clearly differentiate between the characters at the start of the play from the ones at the end.

We interviewed Belfield, director of First Encounters: RSC’s Twelfth Night, and you can read that interview here.

We also interviewed actress Emma Manton, who played Malvolio. You can read that interview here. 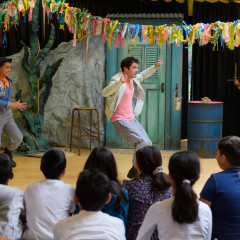