What does it mean to identify as a "mama" in a patriarchal world?

Lea Whitcher undertakes a bold and honest exploration of what it means to be a "mama". She exposes the raw emotions of motherhood, even the ugly ones, committing herself to the truth. She explores the three jobs and pains she endured: carrying a baby, giving birth, then parenting. Each stage sees her giving more and more of herself away, as being a "mama" means putting everyone elses needs above your own.

Whitcher tells her story through performance and movement, acting out childbirth, not shying away from sharing the female body, and being loud and vocal about the hardships.

She also considers how "mamas", and women in general, exist under the patriarchy, and what that means for ones identity. She discusses female rivalry, and gender roles, considering how she used to dismiss "feminine" traits, but now wonders if femininity could be a form of rebellion in itself. After all, sometimes it seems radical to stay "soft" in a hard and increasingly angry world. The message of this session was powerful – it was about being honest about being a woman and being a "mama", especially about the messy parts, since life isn't perfect, and that shouldn't be hidden. The female identity can become warped during motherhood, and Whitcher draws attention to this in a unique way.

Her performance is awkward at times, but perhaps it is meant to be, as the topics she is covering are not exactly comfortable, nor are they light and breezy. It is tagged under "theatre: comedy and storytelling", but I would place it more towards storytelling than comedy. Her storytelling has a powerful message, and if she carried her lines with a little more finesse and confidence, then it could be even more impactful. 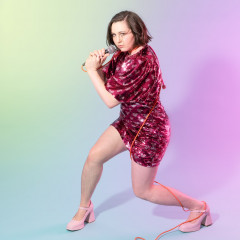 What does it mean to identify as a "mama" in a patriarchal world?