An Emotion of Great Delight offers a searing look into the world of one Muslim family in the wake of 9/11.

An Emotion of Great Delight is a YA contemporary novel by Tahereh Mafi, author of the bestselling Shatter Me series. The novel follows seventeen-year-old Shadi, who is named for joy. But Shadi is haunted by loss — her brother recently died in a car accident, her father is in hospital with heart problems, and her mother is severely depressed. To top it all off, it has been several months since the US declared war on Iraq, and the world has evolved, making life even more difficult for Shadi and her family. Tensions across the country are high, hate crimes are rising, and Shadi, who wears a hijab, is trying to soldier through the pain. But each day, she is retreating farther and farther inside the shell of herself.

Tahereh Mafi has a way of capturing profound sadness like no other author. Her lyrical and eloquent writing style lends itself perfectly to creating the melancholy atmosphere that we see in An Emotion of Great Delight. The best parts of this novel are the ones where we are in the midst of Shadi’s self-consciousness, exploring her sadness. To be so deep inside Shadi’s head, experiencing her turbulent emotions, was beautiful. On a similar note, Shadi’s character was extremely likeable. Her character is perfectly imperfect, realistic, and easy to connect with. In addition, her determination to make her mother proud and to avoid causing her mother further pain, even at the expense of herself, was admirable. Unfortunately, though, the novel was a little on the short side, and the ending was vague and abrupt. It would have been nice to have been allowed to see Shadi’s character develop even further.

Moreover, it was great to see how Mafi utilises the post-9/11 setting to explore the repercussions this event has had on the Mulsim community. Shadi, for example, is singled out on multiple occasions by police officers, and even her peers, for being Mulsim. Here Mafi gives an idea of the prejudice Muslim Americans are forced to contend with daily. Mafi also explores how this can fracture one’s identity — Shadi feels like she never quite belongs; she is always, anywhere and everywhere she goes, at the periphery.

Overall, An Emotion of Great Delight is a moving novel about grief and forging identities in an ever-changing world. 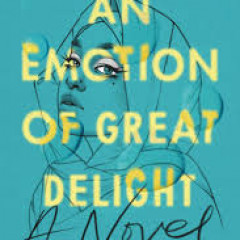 An Emotion of Great Delight offers a searing look into the world of one Muslim family in the wake of 9/11.