Well, I didn't see that coming

Whatever preconceptions you have about An Audience with Stuart Bagcliffe, throw them out of the window. It’s a rubbish title for an incredibly off-beat show which undergoes serval evolutions during its runtime. Indeed the play has a savvier grasp about what it hopes to do than it initially let’s on.

Michael Parker, who plays Stuart Bagcliffe, has a touch of Lee Evans about him. It’s partly the sweaty neurosis, but there’s also a slyness of observational comedy in his character work. Slapstick clumsiness sets the tone as Bagcliffe nervously spills a glass of water down his shirt. It looks like he’s dressed for a job interview. We find out that actually it’s his mother who has put him up to this, that she wrote the show about his high school experience, and that no one else - not even Hollywood - had picked up the script before now, even though it’s clearly destined for stardom.

We feel pity for Stuart, and for the failure of the play. Clearly it isn’t very good. The audience might even look down on him, especially when he covets a diagnosis of a rare liver condition as a mark of difference to signal his specialness. I don’t know how to feel about this laughter in retrospect. The show encourages a kind of derogatory sniggering at Stuart’s naivety, which is flipped back on us in the third act where the play comes into its own. This naivety initially carries over into Stuart's first relationship, his rebellion against an over-bearing parent (and script), and through the general gawkiness of a young lad who hasn’t yet grasped the dangers of the world beyond the classroom.

I didn’t expect the play to take such a turn. What started as a happy coming-of-age story turns into a nightmarish scandal that prods at the unspoken agreement between audience and comedian: that the jokes in the story are a kind of benign transgression in which the harm of the joke is just a fiction with no bearing on reality. It is just a joke, or as a parent might say: don’t worry, everything will be alright. At least within the story, everything is not alright. Like Bagcliffe's mother, we begin to worry for him. Our laughter becomes more uncertain, and suddenly the play feels unsettlingly real.

I find it difficult to reflect on the sleight of hand of the show as I write it. An Audience with Stuart Bagcliffe encourages complacency. The performance by Parker is a convincing, steady decline into trauma – an experience all the more visceral for the light entertainment that lured us into a false sense of security. I’m happy to laugh at Bagcliffe at the beginning of the play, but I also pay the price for it.

The audience is likely unprepared for the themes unveiled in the final act (a heavy show for ZOO to schedule of an early afternoon). It caught me off guard in more ways than one - and I think the play, though imperfect, succeeds in realising some essential truths about what it means to grow up in the modern world. We roll our eyes at the interjections of Bagcliffe’s mother (they have no real bearing on the stakes of the story), but in the end we're no better than her.

Without giving too much away, there's a wonderful, juvenile giddiness to this show about a young man on the cusp of adulthood. The comedy of coming-of-age is a constant well-spring of humour, and Bagcliffe is a perfectly relatable character for our times. Parker is an expert fall-guy for the narrative. An absolute hidden gem of a show. 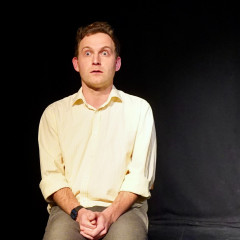 An Audience with Stuart Bagcliffe

Well, I didn't see that coming