A universally appealing show about a difficult to grasp emotion

Shame on You! is a mish-mash of original Russian folk music interspersed between real-life testimony of shame collected from people all around the world. The show itself is low-key and informal – more of a forum that hopes to understand and de-stigmatise shame rather than a theatre performance.

The audience sit in a semicircle on a level with Swiss-Russian duo Trixa Arnold and Ilja Komarov. Their understated approach invites us to join them in engaging with their journalism turned art, as we eventually read an extract each ourselves. The anonymous snippets are pulled from Komarov’s blue workman’s jacket. He tells us that he feels ashamed about the war in Ukraine. I want to tell him that he didn’t have to share that with us, that it's OK. But part of the insight of the show is how we react to shame or feel it for or even on behalf of others. It’s a complicated emotion that we have insufficient language for.

As anyone who’s experienced shame knows, it manifests as a kind of withdrawal or paralysis, a fixation on a memory or action that inhibits us in some way. Public shaming on social media has weaponised this emotion. It can be toxic. On the other hand, to feel no shame or act without it also poses danger. The brilliance of this disarming show is its exploration of an emotion we rarely interrogate without judgement. Some of the voices we encounter we might think deserve to feel shame. Others we laugh at, have sympathy for, or empathise with. Some upset us. Some we might not understand.

Komarov plays his guitar in between readings. During the show, I feel shame for not wanting to step up in front of the audience to help him with his subtitles like others before me. Translations are written on cue cards and tossed aside like in Bob Dylan’s 'Subterranean Homesick Blues'. Why isn’t there a slideshow? Why do I have to do it? I try to avoid his eyes and bury myself in my review notes. ‘I think you’re next,’ says the lady next to me, in a helpful sort of tone. I cycle through the lyrics as best I can to the music, but they’re difficult to read upside down so I have no idea what the song’s about. The others were trad-inflected folk tunes with bleak, domestic lyrics about interiority or impasse. This one's probably the same, although I’m not really listening because I feel called out.

Shame on You! comes across as make-do and a little odd. The two performers (perhaps hosts is a better term) look like they could pack the whole show in a rucksack, because that's exactly what they do. It's why the show feels rich and well-travelled, like a presentation of a larger project, if a bit understated in how it's put together. There’s no pomp or circumstance. Everything is manual, even the backing music is played on vinyl.

I think this what makes the show feel so personal, and why it touches us in the moment: because the show encourages us, even as we shy away, to hold the cue cards every once in a while. A lovely alternative, if you want to see something a little different this fringe. 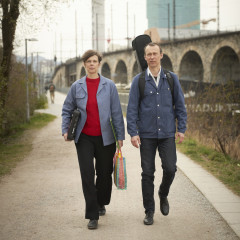 A universally appealing show about a difficult to grasp emotion