The gormless looking but surprisingly expressive and animated purple puppet Randy Feltface is back at the fringe after six years, bringing a new show that talks to humans' evolutionary outsourcing and how we as a species appear determined to cause our own extinction. If you find the prospect of being told by a puppet you're doomed, Randy will permit you to close your eyes and pretend it's a podcast.

Randy has lost none of his anthropological prowess, continuing to opine and philosophise on the human condition while scattering in jokes about 1950 polio children, over-caffeination at a miner's bar in Western Australia and a blow-by-blow account of the fight scene in Liam Neeson's Magnus opus, The Commuter.

With a smattering of multimedia (including a flashy introduction that we were told cost a fortune), and perhaps a tad too much indulging in audience participation (some audience members can quickly feel they deserve equal billing) Randy made astute observations around the ancient tale of Gilgamesh, and tried to draw meaning out of the Anglo-Zanzibar war without sounding lecturey – despite our lecture hall venue.

Feltface continues to be an unexpected but welcome source of introspection, wrapping up comedy with just enough home truth to make his audiences reflect. You will definitely be laughing throughout the show, but between laughs begin to experience just a smidge of existential dread. A real comedy for the times we live in. 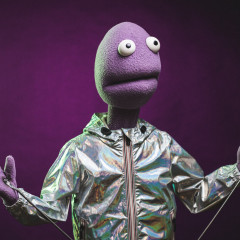