A grotesquely funny one-woman show with a standout performance

Kate is carrying around an empty can of beans. At the office her colleagues offer to throw it away, but there’s no green bin and Kate’s adamant it needs to be recycled. Maybe it's a bit she’s doing, they wonder at the office party that evening. It’s only when the doctor offers to take the can of beans off her hands the next day or so that we wonder what she’s really holding onto.

Written and performed by Clementine Bogg-Hargroves, Skank is a grotesquely funny one-woman show. The self-aware, caricature-like humour of the show is reminiscent of a gangly teenager who doesn’t quite know what to with their limbs. It’s incredibly relatable, and the style of comedy mirrors the main preoccupation of the show, which is the feeling that we aren’t fully in control of ourselves, even as we settle into adulthood.

For Kate, this lack of control feels morbid. She’s convinced the tinnitus in her ears is a sign her body is conspiring against her. As the play goes on, Bogg-Hargroves gurns her full face and body – first for laughs then beyond contortion. Her physical comedy is a joy to watch through parted fingers, as she wrings the cringe from all of the bad jokes the world seems to play on her. It’s a brilliant performance that turns a good script into a great play.

Things could be worse for Kate. At least Sexy Gary is in the office. He’s going to the party later. There’s also, inexplicably, a writing competition for office employees (huh? me neither, but it does get the plot where it needs to go). Kate desires both man and trophy. Together both seem like a crack of light from under a locked door, as Kate desperately fiddles with the handle. Soon the play cranks up the tension and the walls begin to close in.

Skank is full of humour and rare charisma. Bogg-Hargroves’s winning performance almost wards off the ghost of Phoebe Waller-Bridge, whose shadow is far-reaching and whose name we shall not utter when reviewing one-woman shows, at least for the next decade. The title invites the comparison however, and it lives up it favourably. It’s not like there can only be one fourth-wall-breaking writer-actress-comedian with a complicated double-barrelled surname around these parts.

Just don’t quote me on the poster calling it the next Fleabag or some nonsense like that. Even if I think it just a little bit. 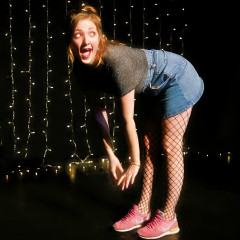 A grotesquely funny one-woman show with a standout performance