Voice MagReviewsDreams of the Small…

What is going on here?

I have seen some weird and wonderful things in Summerhall’s Demonstration Room, but Dreams of the Small Gods was a little more weird than it was wonderful.

Now I’m fully willing to admit I might have missed the point of this “circus act”, but I didn’t understand what was going on until after the show had ended.

Dreams of the Small Gods presents you with a fully nude woman, devoid of self-consciousness and more animal than human. As she suspends herself from a trapeze bearing all to her audience, she performs some beautifully choreographed moves that completely defy gravity. But apart from her acrobatic prowess, there wasn’t much substance to the show at all.

As she becomes more self aware she is faced with a beast who is curious of her, and she it. Her and the beast become one, which was haunting, and I’m guessing she didn’t like the person she was when she embodied the spirit of the beast? I say this because she lays down the mask and returns to her first self but changed somehow – I think is what they were going for.

This concept is really interesting but I wasn’t a fan of the execution because it didn’t come across as deep and profound as I think they were trying to achieve. The pace of the first half was really slow and the point being made could have been realised in less time. That being said, the audience seemed to love it and they clapped for a good two minutes straight.

I was clapping for her ability to climb and swing and move her body in a way that really did capture your attention and awe, but again, that was it.

Dreams of the Small Gods is playing daily at Summerhall’s Demonstration Room at 19:50. 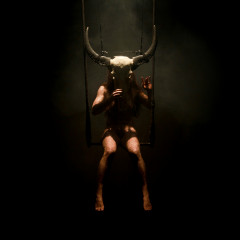 Dreams of the Small Gods

What is going on here?