Katie Norris and Sinead Parker are the eponymous sirens, here to drag their captive audience (literally at points) into their weird, warped and hilarious sketches.

Following the pandemic, Parker has trained in dramatherapy and Norris has written a three-act play called The Lighthouse, which follows the story of Veronica Ham as she looks for her sister. Sirens is (loosely) structured around around that play, with each act intersected with sketches that dissected techno boyfriends, strong northern women, a back-and-forth about comparative ‘tightness’, and Kentish incest.

Dressed in black skin-tight catsuits, the pair sang, danced, and harassed the audience throughout the show, demonstrating a real love for their material and the thrill of being back on the stage after a few years off. A couple of the sketches were less raucous laugh out loud affairs, but on the whole each was successful in execution.

The show ended on another great song, while a slideshow tribute to their long friendship and performance career played off to the side. It was surprisingly emotional.

Norris & Parker will always have that feel of cult status, the air of ‘if you know, you know’ – think Donnie Darko or Garth Marenghi's Darkplace, but with more songs and the constant threat of audience interaction. And while that means they’re unlikely to ever fill out Hammersmith – or get The Lighthouse into the West End – but for those in the know they are a delightfully guilty pleasure. 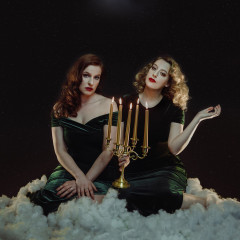 Katie Norris and Sinead Parker are the eponymous sirens, here to drag their captive audience (literally at points) into their weird, warped and hilarious sketches.