Chaos, assemble. You are in a school assembly in Siblings: Siblage. Admittedly, as an audience member, it feels much more like falling down the rabbit’s hole into some strange psychedelic wonderland.  At the heads of the table are two head girls leading said assembly, played by real-life sisters Maddy and Marina Bye – but that’s only touching the surface level of this show.

Sketches, physical comedy, class clownery – a small sample of ways to describe the comedy in Siblings: Siblage. We are introduced to the head girls, a teacher scrambling for his moment in the spotlight, an early school production of the Wind in the Willows, and two teachers butting heads over their mutual romantic interest.

It’s a trippy show, but not entirely unfamiliar – it takes all those relatable aspects of being in a British school and transforms them into a wild ride of an hour where each sketch is better than the last. One of the highlights is a segment starring two intimidating staff members teaching the audience about drugs and alcohol with all the appeal of a painfully funny GCSE drama piece. Maddy and Marina Bye take the unbelievably cringe nature of a school assembly, and raise the bar further.

I mean, there is impressively a fully-fleshed out 3-part American Play called ‘Who’s Your Daddy’ written/directed/starring a teacher who seems desperate to be scouted. Rather inappropriately it co-stars one of his pupils, the two play a gym teacher and budding student-athlete who hilariously skirt around the possibility that they may be father and son. The acts appear scattered across the show, but it never borders on tiring when it does reappear. In fact, you end up wanting to know the resolution of it all.

Maddy and Marina Bye match each other’s energy throughout the show, and are able to read each other, instantly adapting to their different characters with the ease of flicking a light switch – these two are surely ones to watch out for in the British sketch comedy scene.

Siblings: Siblage is a show with the same energy as a fire alarm being set off, it is consistent and really loud. There are rarely any dull moments, and the audience is generally left in hysterics or trying to take in what they’ve just witnessed.

If there is a character comedy show you must see at this year’s Edinburgh Fringe, do yourself a favour and make it this one. Riotous fun. 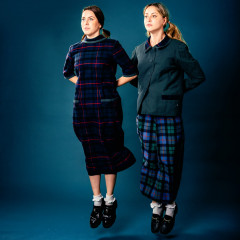