There aren’t quite the words to describe what goes on when that door closes, but I’m going to try.

Trainspotting Live is a fucking mess. It’s loud, brash, crude and – worst of all – it involves audience participation.

Before I entered the theatre, I met a couple who had told me they’d seen it three times. As nice as this couple were, I’ve now come to the conclusion that they must have been insane. When the woman was about to fill me in on a little spoiler, her husband shushed her, turned to me and said, “It’s better if you go in there blind.”

At this point, I’m nervous. And boy oh boy did I have every right to be.

Walking into the setting of a rave, audience members were pushed, shoved and shouted at by the cast to sit down. The music was obnoxiously loud and the lights were blinding. About 10/15 minutes into the show, there was full frontal nudity, and I watched a grown man simulate shitting himself and then throw the shit covered covers into the audience. I pray that it was Nutella. As lucky as I was to escape the flying shit-covered duvet, I did later get fake piss thrown at me, along with everyone else on my row. Why, you ask? Good question.

It may sound obvious, but there is nothing glamorous about a “scag addiction.” It’s one of the worst drugs on the planet and it has destroyed so many lives. Trainspotting Live catapulted you through all the highs and lows of a heroin addiction in the most graphic way possible, and therein lies the brilliance of the show. There were very realistic depictions of sex, drug abuse, and domestic violence – they even recreated the infamous cot death scene from the film which was so jarring, I watched two people head for the door never to return.

I don’t care what anyone says, no amount of warning could have prepared you for how raw and intense it was in that theatre. Sure, there were comedy scenes that broke the ice a bit but the show, experiencing Trainspotting in that way, was a total mind fuck.

But, and this is a big but, Trainspotting Live might just be the most genius show of the fringe. I say might because after leaving the performance, if someone had asked me my name I think I would have gotten it wrong, I was that frazzled. I get that I’m not exactly selling this as the must-see show of the fringe, but you must go and see this show. Maybe not three times, but once at the very least. It’s as raw as it gets.

Every single cast member should be really bloody proud of themselves because the whole point of art is to cause a reaction. And once they close those doors and you’re in there with them, there really is no outside world. Just the cast, their audience, and so many strobe lights I thought I was going to have a stroke. On that note, whoever was doing the lighting deserves an award. The last scene where all five cast members are together plays like a photo montage and it was sublime. It felt otherworldly and it was stunning to watch.

Trainspotting is playing TWICE a day at the Pleasance EIIC at 6 and 9 pm throughout August. 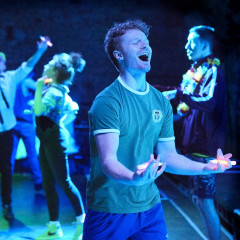 There aren’t quite the words to describe what goes on when that door closes, but I’m going to try.