Flat Shoes In The Club is an ode to that single girl. The one who doesn’t quite know what she wants out of life and is forever being questioned by her family. The one who guys like the idea of but not what it actually means to be with them. The one whose friends feel like they have to baby or question her. Eme is that single girl, and quite frankly, she’s tired.

Flat Shoes In The Club depicts that rare occasion for Eme where she’s actually in the mood to go out – I know how she feels. Eme feels like the world is on top of her and she just wants to have one night with her friends, turning up to Vybz Kartel without a care in the world. No men and no one she has to impress for once.

Eme's show felt like an intimate conversation with a friend, which, as touching as it was, may have also been its downfall. The voiceovers were a nice touch but when it’s just you on stage pretending to be on the phone and listening to this voice over, it’s not quite enough to hold everyone’s attention. Each voiceover had its significance, but it wasn’t very engaging to watch and they ran a little long. Being just Eme on stage, with an infrequently used screen behind her, meant that a lot of the time we were just looking at Eme sitting by herself, smiling. For a show that is essentially an hour of straight-talking-telling-it-like-it-is, the energy and engagement needed to be in overdrive, and unfortunately, I didn’t feel that.

Speaking of the voiceovers, there is one we need to talk about: Darnell's. Darnell's voice over completely ruined my mood, and I truly felt like I was trapped in a room with a Darnell from my past – not my ideal Sunday afternoon. Although this sounds like a criticism, it’s not. Eme captured the character of Darnell with so much accuracy it was scary. We’ve all spoken to, dated, or messed around with a Darnell, so to hear him come to life at the Underbelly’s Dairy Room was unwelcome to say the least, but it made the show that much more relatable. It also showed how much of herself Eme put into the show which is something I always appreciate.

Eme Essien has charm and talent and she is certainly one to watch. You can watch Flat Shoes In The Club everyday at Underbelly’s Dairy Room at 15:45. 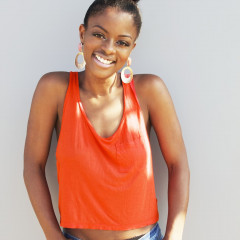