Dedicated to her recently passed supporting act, confidant and straight talking best friend, Phil, Hot Mess is anything but.

The line to see Angela almost circled the courtyard twice; being my first time in her company, I can completely see what all the fuss is about. Angela Barnes is a natural born storyteller, making her audience “ooo” and “ahh” in all the right places. After what felt like a lifetime of Boris bashing that had the audience howling, Angela switched gears and delivered a heartfelt dedication to Phil Jerrod: her supporting act and best friend who passed away on her wedding day.

Hot Mess is the embodiment of 'if you don’t laugh you’ll cry'. So laugh we did, and hard. Angela's show is so named because Angela doesn’t see herself as the kind of woman who has the confidence to wake up and put a white shirt on as if it's going to remain clean the whole day. She is in no denial about who she is and who she isn’t. The song to her first dance at her wedding was Kermit the Frog, she walked down the aisle wearing green glitter-y Converses (I believe), and the most radical of all, chose a wedding dress that showed her arms. I know right, how dare she? According to bridal-shop-Carol, that’s just something brides in their 40’s simply do not do.

Hot Mess was supposed to be a show about Angela discovering that she had adult ADHD, but in keeping with her diagnosis, she got distracted. Instead, she decided to dedicate the show to all of the things that irked her in the last two years, and no surprise, Boris and his cronies are slap bang in the firing line.

Everyone may very well be walking around maskless, with unwashed hands, and no social distancing, but that doesn’t mean Angela has forgotten just how tragic the last two years were. From the spectacle that was #partygate to finding out just how unessential you are by order of the supermarket shopping line, it's no wonder Angela spent the pandemic finding any excuse to drink just like the rest of us. Unlike the rest of us, Angela not only drank her body weight, but she walked the dog - a lot - planned a wedding, and lost her best friend Phil on her wedding day. This was the emotional twist I wasn't expecting from Hot Mess, but she delivered it with such grace that, instead of leaving completely bummed out, you left feeling uplifted and grateful.

If Angela learned one thing from the pandemic it's that the key to succeeding in life is making time good during the bad times.

"If you don’t do that, all you’re left with are bad times, and that simply just won’t do."

Angela is charming, Hot Mess is hilarious, and she delivered a lot more than people were expecting. Hats off to Angela, and if Phil was here, I don't doubt you would have made his night as well.

Hot Mess is playing at the Cabaret at Pleasance Courtyard @ 19:00.

Read our interview with Angela here.
For tickets and more information, visit edfringe.com 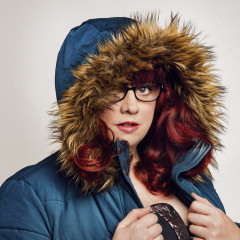 Dedicated to her recently passed supporting act, confidant and straight talking best friend, Phil, Hot Mess is anything but.