Well done for not talking about your vagina, Alison.

What is it about the Irish accent that when an Irish person tells a joke, it’s instantly 100x funnier? Alison Spittle is one funny Irish woman, with almost too much comedy gold to choose from.

Alison’s show ‘Wet’ is about Alison, of course. Her sexual experiences, her embarrassing experiences and whatever other experiences she could think to tell us about in that moment. I have honestly never seen a comedian so effortlessly be at one with their audience, to the point where they're just telling jokes that aren’t even part of their act. Alison couldn’t help but laugh at herself and she had absolutely every right to because this woman is hilarious.

The Attic at Pleasance is quite an intimate venue which served Alison well as, within a few minutes of knowing us, she regaled us with stories I would have probably saved for my last confessional. Alison’s a Catholic, well, ex-catholic, and she in no way went on for several minutes about how much she blames the Catholic church for her mental health issues, and fear of being impregnated...

Alison had been performing for about 30 minutes when I started to believe she had done the impossible. Could it be that a fat, female comedian hasn’t reached for her arsenal of on-the-nose fat jokes to get a cheap laugh from her audience? Of course not, but there was nothing cheap about Alison’s fat jokes. As disappointed as I was they had to make it into the repertoire, as she was doing some well without them, I’d be lying if I didn’t say her water aerobics shtick had me in pieces.

I will say this about ‘Wet’; there are some real hard-hitting topics underneath the veil of Alison’s raucous laughter but it felt like they were glossed over. I got no sense of how Alison felt being in some of those sadly-typical-but-no-less-anger-inducing situations at the hands of men, and I really would have liked to.

I’m sure it was by design that Alison only touched on these issues and I guess that worked for this show, but I would like to see another show from Alison where these issues are her centrepiece. Not because it hasn’t been done before, but simply because I can only imagine what a show like this in Alison’s hands would be like. I don’t think it’s one I’d want to miss.

Alison Spittle is a comedy boss, and regardless of what anyone says, laughing at your own jokes only makes the whole situation funnier – that, and the Irish accent. 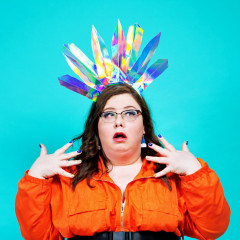 Well done for not talking about your vagina, Alison.