Not your average elderly couple…

Australian comedy duo Claire Bartholomew and Daniel Tobias of Die Roten Punkte star in The Anniversary, a show I can only describe as a murderous episode of Pingu, but instead of penguins, it’s Jim and Barb.

Jim and Barb are celebrating their 50th wedding anniversary and excitement is certainly in the air; although they wouldn’t tell you that – at least not with words. The Anniversary has no dialogue which is a hard line for performers to walk. The only dialogue the two needed were “Jim” and “Barb”, which is lucky because that is all we got.

What was supposed to be a very special evening with all of their friends, especially Sue and Cheryl, turned into a bizarre, outlandish murderous event that would have stumped even Hercule Poirot.

Jim and Barb – I mean Claire and Daniel – are a great team. The two feed off of each other’s energy and you can tell they have been working together for a long time. They bounce off one another actions and are simply a joy to watch.

If this kind of comedy isn’t your thing however – which I have to say it’s not mine – you may find yourself losing focus a little around the middle. The cure for that? How about making Barb fall through a table? Or spraying the audience with water? Or having a bird on a stick attack the audience? The Anniversary did in fact do all of these things, and although I was thankful to be sitting in one of the back rows, those in front weren’t so lucky.

That being said, people seemed to genuinely enjoy it, so whatever Jim and Barb were selling, the audience were definitely buying. Despite probably being most people’s first show of the day – The Anniversary wasn’t short of collective hysterical laughter. The funny, if not slightly twisted, dynamic duo know how to work a stage and, because I’m nosy, have some very loyal fans among them.

The Anniversary is playing at Pleasance Dome (King Dome) every day at 12:00 pm. 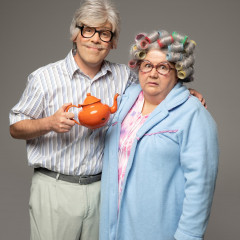 Not your average elderly couple…