If you can only see one monologue this fringe, make it this one.

Breathless is a beautifully written monologue performed by Madeline MacMahon and written by Laura Horton.

Sophie is a hoarder but she doesn’t know it yet. Or more realistically she does know but is not ready to admit it to herself. In her 30’s, Sophie is simply trying to navigate life after being evicted and dealing with the fact she’s been denying her sexuality since she was 14.

Right there is the support everyone coming out needs from their parents, and it was these words from her mother that sees Sophie on her first date with a woman – Jo.

Jo seems great and has taken a genuine interest in Sophie. They’ve been on lots of dates, Sophie gets butterflies and it’s obvious that the two have a real connection. There’s just one problem, Jo wants Sophie to invite her in.

Now, to the naked eye, or neurotypical mind, Sophie simply likes to shop – a lot. But it soon becomes clear that her addiction to sample sales and charity shops is not an innocent online shopping habit born out of the pandemic. Sophie has a problem, but how will she come clean about what’s really going on in her wardrobe when she’s trying to deal with it single-handedly?

Breathless was effortlessly entertaining, and moving. After getting off to a slow start, I was so invested in where Sophie’s story was going, in some ways I didn’t want it to end. Madeline commanded the small stage at Pleasance Bunker Two, and once she found her feet she had everyone’s attention.

Whether you can directly relate to Sophie or not, Breathless is honest, funny and emotional. It puts the human story at the forefront of mental illness and gives you a unique insight into what it’s like to live with every day. I had tears in my eyes by the end because whether it’s hoarding, or hiding something else about yourself, we all just want to be accepted for who we are.

Breathless is playing at Pleasance Bunker Two at 15:00 and your attendance is strongly encouraged… just someone bring a tissue. 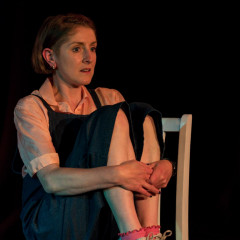 If you can only see one monologue this fringe, make it this one.