In this hilarious show, Charlie Russell aims to please everyone, and unsurprisingly, she succeeds.

In this lively, unpredictable, and engaging show, Russell takes the audience on a whirlwind tour of the Fringe tropes― there’s singing, dancing, improv, slapstick and even a bit of magic! If you're going to watch this show, be ready to laugh and be ready to get involved, you will be asked for your favourite shows and she will include them in her performance. In my show, cartoons, Fleabag, and Wicked all somehow made an appearance.

There’s no doubt that Russell is an incredibly versatile and talented performer. She’s got it all, with a brilliant stage presence, amazing voice (and talent on the kazoo), some great moves and a bright personality that made the whole audience immediately engaged. I love the little gimmicks like the cymbals that were hit every time Russell completed another style of theatre and the stickers that proudly declare ‘Charlie Russell Pleased Me’. The whole bit really united the audience as we lifted our stickers into the air and proudly stuck them on to our chest, making everyone feel like they were part of the show.

Like the best comedy, Russell is able to make you laugh, get you vulnerable before punching you right in the heart. You could physically feel every emotion that Russell was expressing travelling through the room because of the trust she was able to build with the audience, especially at the start of the show.

The final third took me by surprise as the tone change was so unexpected and sudden. In a second, the show went from hilarious to honest. The room was suddenly uncomfortable because of Russell’s vulnerability― of course, this was probably intended this way. Although this change worked because of Russell’s endearing personality, it felt like I was suddenly watching a very different show. It was so raw and exposed, and Russell so vulnerable, that it felt like the audience didn’t know what to think.

Although it left on a sad but honest note, Russell’s show is certainly one to watch for those who like a bit of everything: you’ll certainly be pleased. 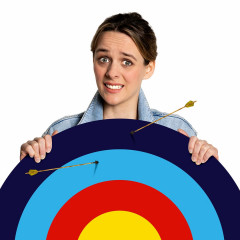 In this hilarious show, Charlie Russell aims to please everyone, and unsurprisingly, she succeeds.