A well-executed characterisation, but undermined by its subject matter.

When Boris was 18 he was cast as Richard III. Apparently it went exactly as you would imagine. Boris the Third is that scenario, imagined and realised.

The start of the play had me slightly worried, with some quite hammy acting and the sort of quippy dialogue that always comes across as unnatural. But then Boris appeared.

Harry Kershaw captured Boris perfectly. Really truly nailed it. He had the hunch and loquacious affectation. The bumbling facade that masks both his offensiveness and his temper. He clearly loved being on stage, both as actor and character.

However, presenting such a convincing Boris was only ever going to come at the cost of his castmates. As in real life, anybody captured in Boris’ aura tended to fade into the background, acting as reactionary characters to the Boris show, rather than having a direct impact on him. Whether this was his girlfriend Katie (Poppy Winter), the director of the school play, Fran (Phoebe Ellabani), or his best friend Nav (Matthew Cavendish), none managed to really provide balance to the bombastic charm offensive. The visiting industry professional Rhonda (Lorna Lowe) perhaps got closest – seeing through the thin veneer of Boris’ charm from the start. She provided some challenge to his isolated world view, but that wasn’t really utilised beyond a springboard for an outburst – but perhaps there is nothing to explore?

“Sometimes I do stupid things. I don’t know why.”

In a way, even the play has been overshadowed by Boris proper. Once seen as a clown, Boris Johnson is now a public embarrassment, a fool who outstayed his welcome. It was hard not to grow increasingly exhausted with the non-stop foolerly of Kershaw’s Boris. What was probably an interesting satirical skewering of Boris when it was written is now just a reminder of just how disastrous and ill-equipped he ever was to lead, and sadly the contemporaneous additions to the script did little to remedy the Boris fatigue.

Boris the Third is an excellent imagining of what Boris was like as a teenager, and provided some great laughs but, like its subject matter, ran out of steam and its ending felt cheap and unnecessary. 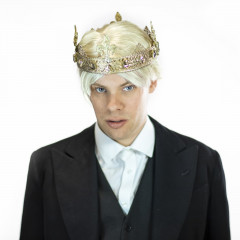 A well-executed characterisation, but undermined by its subject matter.